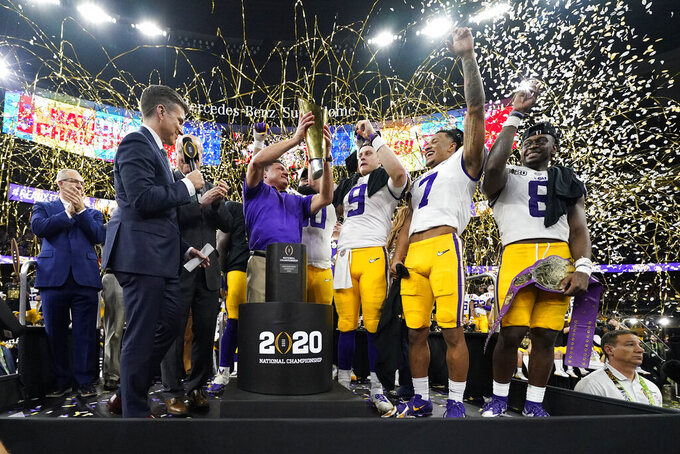 LSU has begun asking a number of football players to self-quarantine in the past week because of instances in which some players tested positive for COVID-19 after social interactions outside of the Tigers’ training facility.

“This is what we anticipated. We planned for this. Our plan is working the way it should,” Senior Associate Athletic Director of Health and Wellness Shelly Mullenix told The Associated Press on Saturday, adding that none of the players have exhibited “significant” symptoms.

“We haven’t seen anything even close to a bad illness, but we’re prepared for that,” Mullenix said. “What we have right now is quite manageable.”

Mullenix declined to specify the number of players who’ve tested positive for COVID-19 or the precise number of those asked to quarantine, stressing that the number is fluid and can fluctuate considerable in short periods of time. But she emphasized that a single positive test could result in as many as 12 to 15 players being asked to initially quarantine because of LSU’s contact tracing procedures. Several media reports have attributing specific numbers to unnamed sources, but Mullenix called those numbers “inaccurate.”

“If our quarantine number is high, it means our players have been communicating not only where they’ve been and who’ve they’ve been with, but also their symptoms, as we instructed them to,” Mullenix said.

Some schools have released figures on COVID-19 testing. On Friday, Clemson said 28 athletes or staff members have tested positive since returning to campus June 8. Last weekend, Louisiana Tech said it had one positive test.

Mullenix said LSU has been working closely with state health officials who would be able to suggest that the football program make changes or even halt workouts at its Baton Rouge, Louisiana, campus if they saw a need for that.

“We’re fortunate in what we’re seeing,” Mullenix said. “If they were to ask us to close down, that would be evidence that we’ve crossed some threshold that’s too difficult to manage.”

LSU players began reporting to the on-campus training facility during the first week in June for antibody testing and physicals.

Strength training and conditioning began the following week with social distancing rules that limited the number of players in the weight room to 20 at a time at regularly sanitized and spaced-apart racks. Each rack contains all weights needed for the day’s workout, so there’s no need for players to cross paths or take turns using the same equipment. The racks are sanitized between each use and LSU also has set up machines like those in hospitals which circulate air through virus-killing ultraviolet light.

Also, players must answer a series of questions and have their temperature scanned before they may enter the facility.

“We’re monitoring it on a daily basis,” Mullenix said. “We’re catching people (with temperature or symptoms) where we want to catch them, right at the entrance, and we’re able to quarantine people before they even get into the facility.”

Mullenix said LSU’s combination of testing for antibodies and active disease, as well as contact tracing, has enabled the university to virtually rule out transmission occurring at on-campus football facilities.

But she noted that LSU always expected at least some players and possibly coaches to contract the virus throughout the year, particularly as they go about their lives outside of football.

“It’s a pandemic; by definition, it would have been foolish to think it wouldn’t happen,” she said, but added, “If these cases are accounted for, then there’s control, which is different than if you had a bunch of cases popping up and had no idea where they were coming from.

“We’ve limited community spread, slowed down spread through the team,” she added. “It’s a slow, controlled burn. The curve is flat and that’s what you want."

LSU, the defending national champion, is scheduled to open the season Sept. 5 against UTSA in Tiger Stadium.