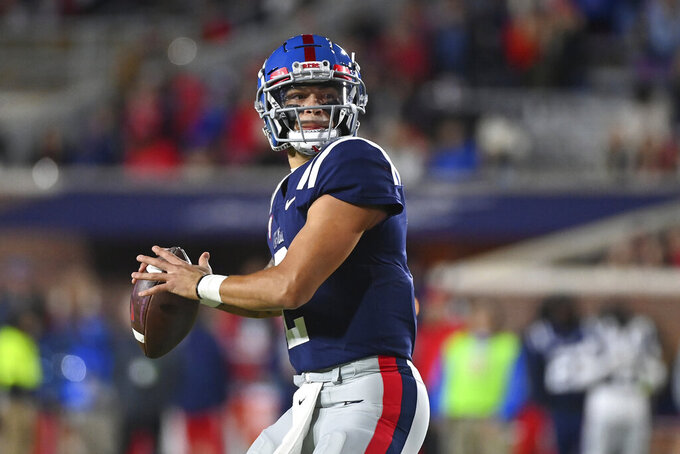 OXFORD, Miss. (AP) — Matt Corral threw for 326 yards and two touchdowns in his home finale and No. 10 Mississippi beat Vanderbilt 31-17 on Saturday night.

“It was a sandwich game and there are some teams that got upset this season in that situation. We didn’t,” Ole Miss coach Lane Kiffin said. “I was a little surprised by how we played, but we came away with the win. It is what it is.”

Corral completed 27 of 36 passes, including a 10-yard touchdown strike to Dontario Drummond early in the second quarter. The Rebels led 31-9 in the fourth quarter on an 8-yard touchdown run by Henry Parrish Jr.

“It was a sloppy win, but what’s going through my head is getting ready tomorrow,” Corral said. “I’m happy to win, but I’m not happy with my performance.”

Drummond had seven catches for 81 yards. Ealy had 154 yards of offense, highlighted by a 68-yard kickoff return and a 4-yard touchdown run. Jahcour Pearson had 101 yards receiving as the Rebels finished with 470 yards.

“We knew that they had a dynamic player at quarterback. I did not feel like we made enough plays on him when we had opportunities particularly in the first half,” Vanderbilt coach Clark Lea said. “You have to make the plays and you have to interlock all three phases. We weren’t able to do that effectively enough tonight.”

Rocko Griffin ran for 117 yards and touchdown for Vanderbilt (2-9, 0-7). Joseph Bulovas added three field goals as the Commodores controlled the ball for more than 38 minutes and finished with 454 total yards.

“I’m proud of the way this team is fighting,” said quarterback Mike Wright, who completed 22 of 44 passes for 241 yards.

Vanderbilt: Over a three-year span, the Commodores are 0-20 in the SEC.

The effort was admirable and Griffin was a work horse. The first year of a massive rebuilding job by Clark Lea ends next week, but not before facing another high-powered offense at Tennessee.

Ole Miss: The Rebels were good enough in a sandwich game between No. 16 Texas A&M and in-state rival Mississippi State. Ole Miss remains in position to earn a New Year’s Six bowl bid, a 10-win regular season and a Top 10 ranking heading into a high stakes Egg Bowl on Thanksgiving night.

“We’ve got a lot of stuff on the line and we’ve got to get locked in,” Corral said. “It’s a quick turnaround to Thursday and there’s a lot to get done.”

Vanderbilt: At Tennessee on Saturday.

Ole Miss: At Mississippi State for the Egg Bowl on Thursday.