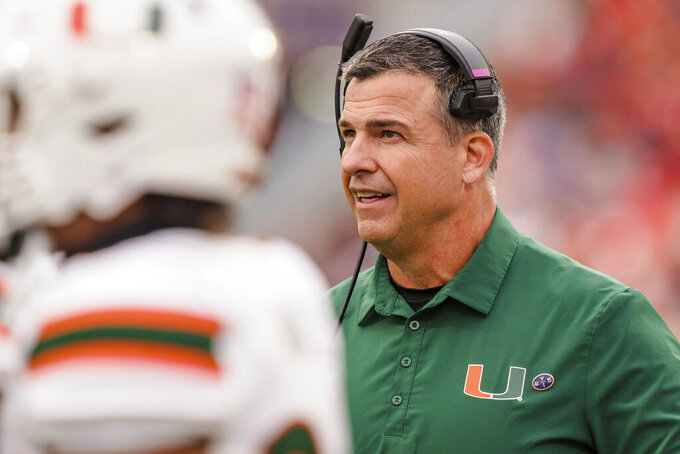 Miami head coach Mario Cristobal looks on in the first half of an NCAA college football game against Clemson on Saturday, Nov. 19, 2022, in Clemson, S.C. (AP Photo/Jacob Kupferman)

For Miami, it’s simple: A win clinches bowl eligibility and spares the Hurricanes a losing ACC record this season. Pitt can enhance its bowl attractiveness with a win; the Panthers are postseason-bound either way.

Miami’s running game vs. Pitt’s defensive front. The Hurricanes managed 30 yards on the ground against Clemson. A one-dimensional Miami is a bad Miami.

Pitt: RB Israel Abanikanda is seeking a sixth consecutive 100-yard game. He’s up to 1,320 yards and 18 rushing touchdowns this season, which should have him at the front of the line for All-ACC — or even loftier — honors.

Miami: P Lou Hedley will play in his final “home” game, even though Miami is about 11,000 miles from his hometown in Australia. He’s averaging 45.2 yards per kick, and is coming off a season-best 50.8-yard average against Clemson.

The Hurricanes have not ruled out QB Tyler Van Dyke (shoulder), who is trying to get back after being sidelined for much of the last month. ... Miami is 22-3 in its last 25 games against Pitt. ... A loss would mean Miami falls to 5-7; the Hurricanes have ended a season at 5-7 (or worse) only once in the last 45 seasons. They were 5-7 in 2007, and 3-8 in 1977. ... Pitt is trying to go 4-0 in November for a second consecutive season. Before last year, Pitt hadn’t had an unbeaten November since going 3-0 in 2001. ... The Hurricanes are trying to avoid their first five-game home losing streak since Oct. 19, 1973, through Oct. 4, 1974. The last time Miami lost five in a row at home, in the same season, was 1963. ... A win would be the 61st at Pitt for Panthers coach Pat Narduzzi. That would put him alone in second on the school’s all-time list, breaking a tie with a rather well-known coach named Pop Warner. Jock Sutherland (111 wins) is Pitt’s all-time leader. ... Miami has been outscored 182-179 at home this season. The Hurricanes haven’t gotten outscored at home over a full season since 1977. ... Pitt has five defensive TDs this season, tying a school record set in 1986 and matched last year.