Minus Nick Saban, No. 1 Alabama hosts rival No. 22 Auburn 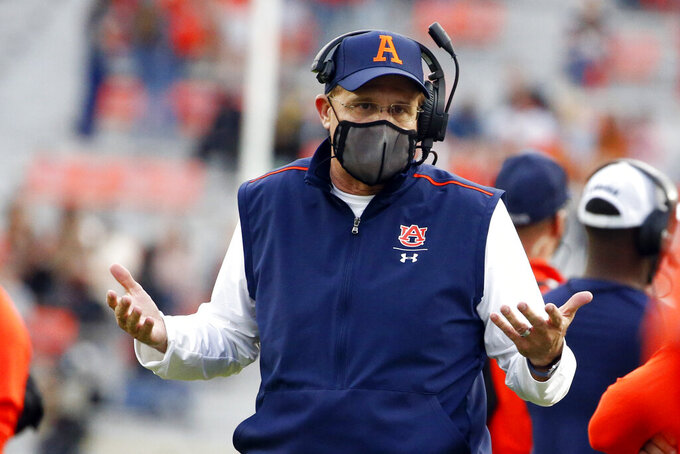 Auburn head coach Gus Malzahn reacts to a call during the second half of an NCAA college football game against LSU on Saturday, Oct. 31, 2020, in Auburn, Ala. (AP Photo/Butch Dill)

It was never going to be the typical Iron Bowl atmosphere, not with a mere 20,000 or so watching in person.

Making it seem even more surreal: Alabama coach Nick Saban won't be among those in the stadium.

The top-ranked Crimson Tide (7-0) hosts No. 22 Auburn (5-2) Saturday in a season comprised of all Southeastern Conference games with one postponement apiece. This year's Iron Bowl also won't be the usual regular-season finale for the teams.

Saban, who tested positive Wednesday for COVID-19, will be watching from home and barred from communicating with his team during the game or at halftime. Offensive coordinator Steve Sarkasian will handle that, minus the famous Saban scowl.

“The Auburn game is obviously our most important game and we hate it that this situation occurred,” Saban said. "But as I’ve said many times before, they’ve got to be able to deal with disruptions this year, and our players have been pretty mature about doing that.

“We just want to carry on the best we can.”

The Tigers enter as nearly 25-point underdogs in a rivalry game intense enough that coach Gus Malzahn says, “I think about it 365 days a year.”

“This isn’t a normal game," Malzahn said. "This is the Iron Bowl.”

The Tide's six-time national champion coach won't be on the sidelines, but Alabama still has its typical stockpile of talent and a potent offense led by quarterback Mac Jones, wide receiver DeVonta Smith and tailback Najee Harris.

Jones is considered one of the leading contenders for the Heisman Trophy after some costly mistakes in last year's 48-45 Auburn win.

“It’s a rivalry, so of course, like, you know, we’re like, ‘Oh, we won last year,’” Tigers safety Jamien Sherwood said. “But he’s also looking for redemption as well. He came in last year, and we got the upper hand on him. He’s looking to get us back.”

Leading rusher Tank Bigsby, offensive tackles Brodarious Hamm and Alec Jackson are all listed as questionable with injuries for the Tigers. If Bigsby can't go, the top choices would be Shaun Shivers or D.J. Williams. Austin Troxell replaced Jackson against Tennessee and junior college transfer Brenden Coffey filled in for Hamm.

Saban said the biggest thing he’ll miss about leading the team during the game “is being with our players.” But he’ll have a better view than most of those watching from home.

“We can actually pipe the game in,” Saban said. “You can’t see much on TV so I’ll have the same film that we take of the game, which is the film that we watch on Sunday, so I’ll be able to see a little bit more of what’s happening.”

Sarkisian hasn’t officially returned to a head coaching role yet, but he will for a day. He has directed a prolific offense since returning from a stint with the NFL’s Atlanta Falcons.

“He does a fantastic job and I think the body of work really speaks for itself,” Saban said.

“They’re very impactful," Alabama cornerback Patrick Surtain said. "It can change the momentum of the game, defensive scores, and it builds confidence in the defense. And also, going into the game, you’ve got to have plays like that in highly-anticipated games.”

Even with an injured Jaylen Waddle, Alabama has one of the nation’s most prolific receivers in Smith. Now the SEC’s career leader in receiving touchdowns, he has caught 20 passes for 347 yards and six TDs in the last two games. Auburn counters with standouts Seth Williams and speedster Anthony Schwartz, who scored on a 91-yarder against LSU and a 54-yarder against Tennessee.