Navy hopes to bounce back after offense sputtered in 2020 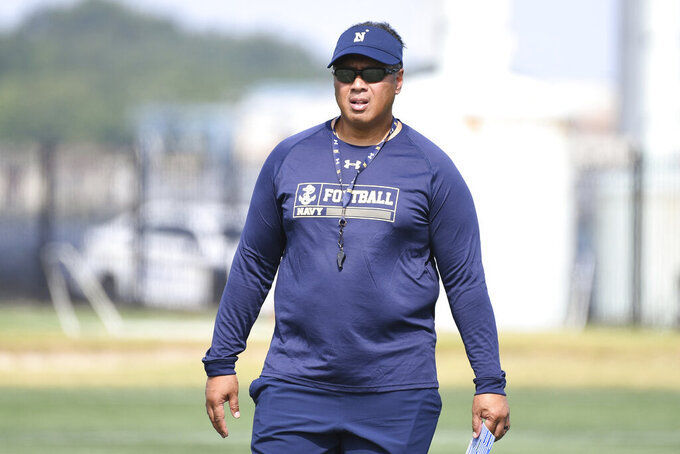 Anyone who watches Navy football knows if the Midshipmen aren't gaining significant yardage on the ground, something's wrong.

Something was definitely wrong in 2020.

“We didn’t practice last year. I don’t know how (much) clearer to say it. We missed 15 practices," coach Ken Niumatalolo said. "When we couldn’t do things, it was totally different from other schools. We were in our rooms, and you could come out for a little bit ... but you couldn’t be with anybody else. You had to be with your roommates.”

Whatever the reason, Navy's offense sputtered last season, averaging just 177.6 yards rushing, the team's lowest output since 1994. The Midshipmen finished 52nd in the country in that category — after finishing in the top six in each of Niumatalolo's first dozen seasons as coach. It was no surprise, then, that Navy floundered to a 3-7 record, only its third losing season in 18 years.

Niumatalolo didn't want to spend too much time looking back, but he clearly feels the coronavirus pandemic hurt his team's chances quite a bit in 2020.

“We were in a pandemic last year. I mean, obviously we’re still in it," he said. "And then the way we practiced was totally on me. ... I was going to make sure that we erred on the side of caution. So I wouldn’t call what we did practice, when we finally came back. ... We were practicing socially distanced football. That doesn’t work.”

As the 2021 season approaches, Niumatalolo made it clear he expects Navy to look like Navy again.

“Our offense is so intricate in the triple-option stuff. You can’t just roll the ball out and start operating," he said. “So we’ll be back. I’m not worried about that.”

One thing that didn't change last year was Navy's aversion to penalties. The Midshipmen averaged 4.4, the ninth best in the country.

Linebacker Diego Fagot has been named to watch lists for the Bednarik Award and the Nagurski Award. Those honors go to the top defensive player in college football.

Navy's defense started slowly last year, allowing 55 points in the team's opener against Brigham Young and 40 in a loss to Air Force the following month. In the final three games, the Midshipmen allowed 44 points combined against Memphis, Tulsa and Army — although they lost all three games because of their offensive woes.

Navy doesn't throw the ball much when things are going well, but receiver Mychal Cooper has 35 catches for 675 yards in his career — an average of 19.3 yards. When the Midshipmen do pass, they want to make it count.

Navy opens at home against Marshall on Sept. 4, then hosts Air Force on Sept. 11 — 20 years to the day after the terrorist attacks of 2001. The Midshipmen are at Notre Dame on Nov. 6, and the matchup with rival Army is Dec. 11 in East Rutherford, New Jersey.

“The toughest schedule that we've had in all of my years of being here," Niumatalolo said. "It's not even close."