No. 1 Alabama faces Arkansas in tune-up for SEC title game 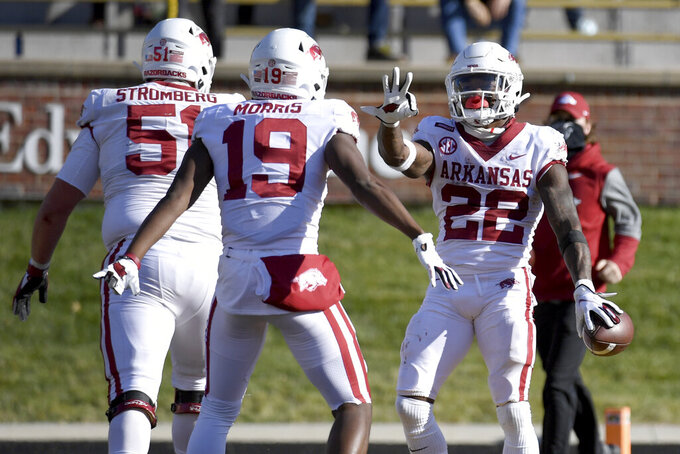 Arkansas running back Trelon Smith (22) is congratulated by teammate Tyson Morris (19) after scoring during the second half of an NCAA college football game against Missouri Saturday, Dec. 5, 2020, in Columbia, Mo. (AP Photo/L.G. Patterson)

FAYETTEVILLE, Ark. (AP) — Sam Pittman knows what it takes to take down Alabama. He’s done it before.

The first-year Arkansas coach was on the Northern Illinois staff on Sept. 20, 2003, when the Huskies pulled off a 19-16 stunner.

“I was there when we went to Alabama and won that game,” Pittman recalled this week. “I remember that we scored more than they did. It was a long time ago. It was a historical day for the Huskies of Northern Illinois.”

That was then, and this is now.

Top-ranked Alabama rolls into Saturday’s game at Arkansas with 97 consecutive wins over non-ranked opponents in the Nick Saban era.

“It’s incredible,” Pittman said of the streak. “Alabama is Alabama We’re really excited to have the opportunity to play them. If you’re going to get a real measuring stick of where you are, you might as well play the best team in the country.”

The Crimson Tide (9-0, No. 1 CFP) has already wrapped up the SEC West and will take on Florida next week in the SEC championship game in Atlanta. Pittman said Alabama’s offense is the best in the country.

“This year their offensive line is incredible, it’s the best in college football,” said Pittman, who was the offensive line coach at Georgia before being hired at Arkansas a year ago. “I’m not sure I’ve seen a college offensive line that well-coached, and that includes offensive lines I’ve coached.”

Although Arkansas (3-6) will finish with a sub-.500 record for a fourth consecutive season, Saban noted the Razorbacks have several close losses and are better than they've been the previous three seasons.

“Arkansas, to me, has a really, really good team that their record doesn’t reflect how well they’ve played,” Saban said. “They’ve lost three games this year by a total of seven points, or they’d be 6-3 instead of 3-6."

Saban said the Tide, who are favored by 31 points, would not be taking the Razorbacks lightly.

“(Arkansas) plays hard, and the coach has done a really, really good job,” Saban said. “Sam’s done a good job, I think, of getting these guys to really come together and play hard, believe in themselves.”

Pittman did not name a starting quarterback earlier in the week. Last week against Missouri, redshirt freshman KJ Jefferson got the surprise start when senior grad transfer Feleipe Franks was forced to sit out with a reported rib injury.

Jefferson played well, completing 18 of 33 passes for 274 yards and three touchdowns and leading Arkansas to a go-ahead touchdown and two-point conversion with under a minute left. Missouri drove for a winning field goal in the final 45 seconds for a 50-48 win.

“I thought KJ gave us a little bit more in the run game,” Pittman said. “He ran the offense incredibly fast."

Saban also took note: "They present some unique challenges with the fastball offense that they run, which we need to do a much better job this time around facing this kind of offense.”

Alabama quarterback Mac Jones has rocketed up the Heisman Trophy watch list and ranks among the nation's leaders in most major categories. He has 27 touchdown passes with just three interceptions, and his 3,113 passing yards have surpassed Tua Tagovailoa’s single-season school record.

“I think we’re gonna have them all back,” Saban said.