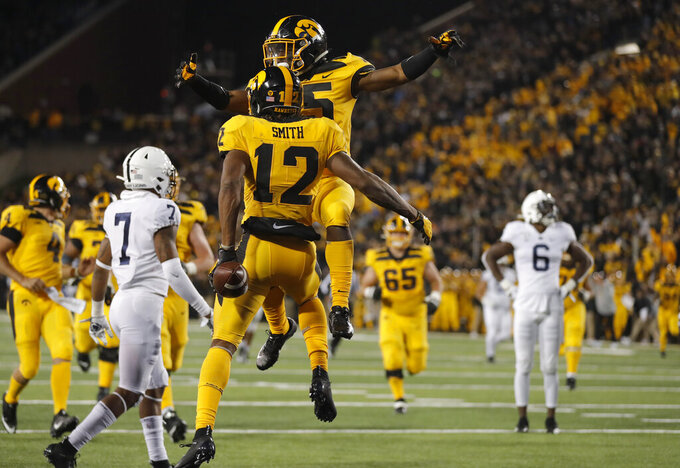 Iowa needs to build some positive momentum after suffering back-to-back close losses to ranked teams. Purdue blasted Maryland 40-14 last week, and a win over the Hawkeyes puts a possible bowl game back in play.

Purdue QB Jack Plummer vs. Iowa's secondary. Plummer, a redshirt freshman, completed 33 of 41 passes last week against the Terrapins. Iowa has been vulnerable at times in the passing game, but the Hawkeyes' banged up defensive backs are getting healthier by the week.

Iowa: RB Tyler Goodson. The freshman lost a crucial fumble in last week's 17-12 loss to Penn State. But Goodson is the most talented back the Hawkeyes have had in years, and it feels as though he might be the starter before long.

The Boilermakers won 20 consecutive games against the Hawkeyes (1961-80), the longest winning streak by Purdue against any Big Ten team in school history. The Boilers also currently have a two-game winning streak in the series. ... Iowa quarterback Nate Stanley's next touchdown pass will be his 62nd, and it'll put him in second place on Iowa's all-time list behind Chuck Long. ... The Boilermakers are averaging just 63.5 yards rushing per game, the second-lowest total in the nation, while Iowa's run defense ranks 17th nationally. ... Purdue has used 30 true and redshirt freshmen this season.