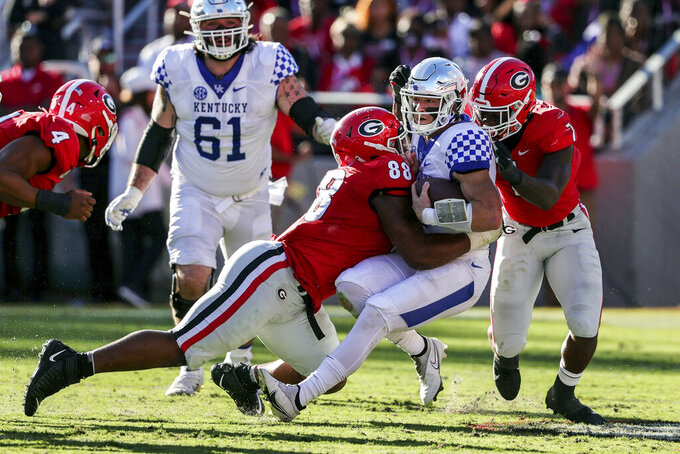 San Diego State leads the nation in rushing defense at 61.2 yards per game.

LSU's Tyrion Davis-Price turned in the top rushing performance of the season with 36 carries for a school-record 287 yards against Florida. Davis-Price was the first player to rush for 200 yards against the Gators since South Carolina’s Marcus Lattimore in 2010.

UNLV's Charles Williams had 27 carries for 221 yards against Utah State, making him the first Rebels player to go over 200 since 2013.

Northern Illinois' Jay Ducker ran 33 times for 210 yards against Bowling Green. The last NIU player to rush for as many yards was Jordan Lynch, who went for 321 against Western Michigan in 2013.

Colorado State's Cayden Camper continues to be the nation's most prolific field goal kicker, going 5 for 6 against New Mexico after making all six of his attempts against San Jose State the previous week. He has at least five field goals in three games.

Camper is 17 for 21 for the season, leading the nation in makes and attempts.

He has hit the most field goals through the first six games of a season since Kai Forbath of UCLA had 17 in 2009. Kent State and Wake Forest each had 17 field goals over six-game spans in 2019.

Colorado State is the only team in the Bowl Subdivision with more field goals (17) than touchdowns (14).

ALL THE WAY, AGAIN

Scarver ran back a kick 100 yards against UNLV on Saturday and has at least one kick return for a TD each year since 2017.

Ohio's Armani Rogers broke a 99-yard touchdown run against Buffalo to set the NCAA record for longest run by a quarterback.

The mark was previously held by Mark Malone who ran for a 98-yard touchdown in 1979 for Arizona State.

Will Anderson Jr. became the third Alabama player to record four sacks in a game when he did it against Mississippi State.

The last Alabama player with at least that many sacks was Derrick Thomas, who had five against Texas A&M and four against Kentucky, both in 1988. Leroy Cook had four sacks against Tennessee in 1975.

Anderson leads the nation in tackles for loss with 15.