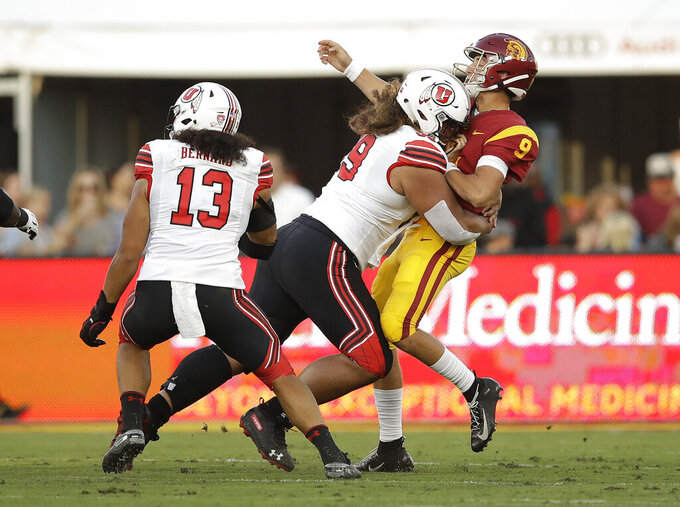 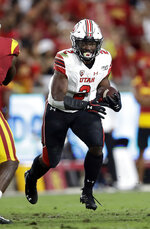 LOS ANGELES (AP) — Southern California quarterback Kedon Slovis was knocked out of the Trojans' 30-23 victory against No. 10 Utah on Friday night after taking a legal but hard hit from Utes defensive tackle Leki Fotu early in the first quarter.

USC coach Clay Helton said Slovis was "dinged up" and was not cleared to return, though he did not specify if it was a head injury. Slovis returned to the sideline in the second half, wearing ear plugs and celebrated with his teammates after the game.

The freshman was making his third start since the Trojans lost quarterback T.J. Daniel to a knee injury in the opening game of the season.

On the second play from scrimmage against Utah, Slovis took a shot in the chest from the 335-pound Fotu right after releasing a pass. Slovis stayed down after trying to get up. Medical staff came out to attend to him and he walked off the field under his own power.

Matt Fink replaced Slovis and completed three passes on the drive, including a 29-yard touchdown to Tyler Vaughns.

Fink remained in for USC's second series and threw another TD pass.

Utah also lost a key offensive player in the first half when Zack Moss went to the locker room with an undisclosed injury. Moss, the Pac-12's leading rusher, did not return for the second half. He had six carries for 20 yards after averaging 124.3 in the first three games.

Moss was on the sideline in the second half with his left shoulder wrapped in ice.

Utah coach Kyle Whittingham did not update Moss' condition, but said the senior would be evaluated when the team got back to Salt Lake City.