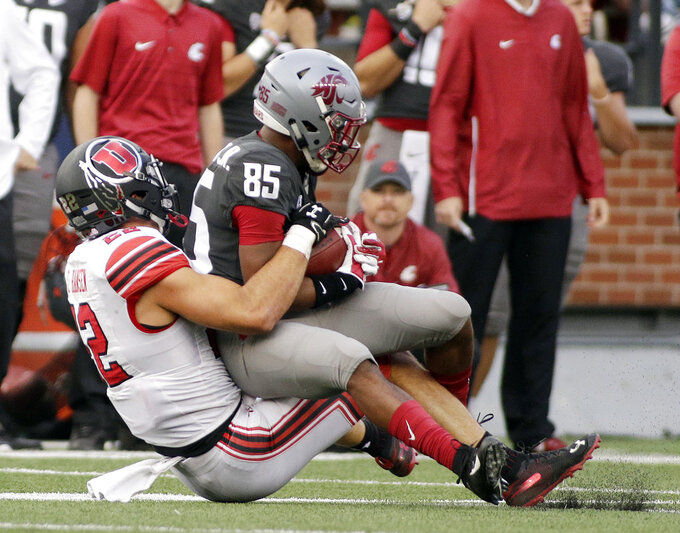 FILE - In this Sept. 29, 2018, file photo, Utah linebacker Chase Hansen (22) tackles Washington State wide receiver Calvin Jackson Jr. (85) during the second half of an NCAA college football game in Pullman, Wash. Hansen has played an important role in getting the No. 17 Utes to their first Pac-12 championship came, where they will face No. 10 Washington on Friday night. (AP Photo/Young Kwak, File)

Hansen first signed with the Utes as a quarterback. During his freshman season, he switched to defense and soon made a name for himself at safety. Even while Hansen played those other positions, coach Kyle Whittingham speculated on his potential to eventually develop into a linebacker.

Entering his senior season, Hansen finally made the move. With tons of depth at both safety positions, and a hole to fill at linebacker, another position switch made sense for him and Utah's defense.

"I always understood I could end up as a linebacker, even when I was at quarterback," Hansen said. "I understood that a lot of people saw me as a linebacker body type and I liked the physicality of the game. So I felt like it was always a possibility. I was just ready to go where the team needed me."

Becoming a linebacker has elevated Hansen's game and helped Utah's already fearsome defense reach another level. He has played an important role in getting the No. 17 Utes to their first Pac-12 championship game, where they will face No. 10 Washington on Friday night.

The senior is a contender for Pac-12 defensive player of the year after collecting 101 tackles, five sacks, four pass breakups, two interceptions, and a fumble recovery through 12 games. Hansen is Utah's top tackler and leads the Pac-12 with 22 tackles for loss. He is tied for third in the league in sacks.

Hansen takes pride in his ability to consistently get into the backfield and be disruptive.

"More than anything, I like to finish a game feeling like I did my job and I helped the team win," Hansen said.

Plugging Hansen in at linebacker has created an effective tandem with fellow senior Cody Barton at that position. Barton is second on the team with 96 tackles. He also has 10 tackles for loss, 3 1/2 sacks, six pass breakups, a forced fumble, and an interception.

Whittingham said Hansen and Barton are probably the best linebacker duo he has coached at Utah.

"They're both the heart of the defense," Whittingham said. "The heart and soul of the defense at that linebacker spot. They've done a great job all year with production and their leadership. You couldn't ask for anything more out of two guys than what we've got out of Cody and Chase."

Barton credits Hansen for pushing him and elevating his level of play. The two are best friends off the field. On the field, they engage in a friendly rivalry to see who can produce the most disruptive plays.

For Hansen, just getting through the regular season healthy is perhaps the best part of his senior year to date. After being named an honorable mention All-Pac-12 defensive back in 2016, lingering injuries caused him to miss games and limited his effectiveness in 2017.

Hansen had specific goals in terms of numbers he wanted to put up and plays he wanted to make when he switched to linebacker. His biggest goal, though, was staying on the field and putting himself in a position to be a team leader and key contributor to Utah's success.

His success in achieving that particular goal is most satisfying to Hansen out of all the goals he has achieved this season.

"That's all I wanted," Hansen said. "Goal No. 1. I said that a million times at the beginning of this year. I said, 'No. 1 thing I want to do is I want to be healthy throughout the year. I want to be on the field and I want to be able to make an impact.' I've always been confident as long as I've been healthy and, this year, it's just been a huge blessing to get through 12 games so far."

By Ralph D. Russo 42 minutes ago
2 hrs ago
By John Zenor 2 hrs ago
By The Associated Press 3 hrs ago
By Eric Olson 4 hrs ago