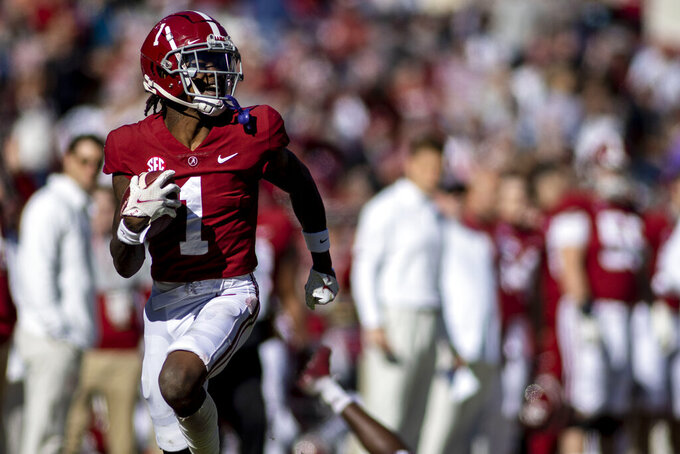 Alabama wide receiver Jameson Williams (1) runs down the sideline on a long pass reception against New Mexico State during the first half of an NCAA college football game, Saturday, Nov. 13, 2021, in Tuscaloosa, Ala. (AP Photo/Vasha Hunt)

Timing is everything in life and this week was a strange-looking time for Alabama to pass Cincinnati in The Associated Press college football poll.

The Crimson Tide moved up Sunday to No. 2 behind top-ranked Georgia in the AP Top 25 presented by Regions Bank. The Bearcats slipped a spot to No. 3.

This came after a weekend in which Alabama won 59-3 — against New Mexico State. No offense to the Aggies, but that's a glorified scrimmage for the Tide.

Cincinnati was coming off a 45-28 victory at South Florida. The Bearcats never trailed after the first quarter and it was 31-7 early in the third. The lead shrunk to 10 and the Bulls (2-9) had the ball with about three minutes left but never did make it a one-possession game.

It was the fourth straight game against a seemingly overmatched opponent where the Bearcats looked less than dominant. Against teams with a combined record of 9-30, in games where Cincinnati was favored by an average 24 1/2 points, the Bearcats won by an average of 12.7 points.

Alabama certainly has had some of those moments, too. Not just in a loss to No. 16 Texas A&M, but in victories over Florida and LSU. Comparing Florida and LSU to Navy, Tulane, Tulsa and USF stretches credibility, though the Gators are in a free fall and currently doing their best impersonation of an FCS school.

Alabama already had made up most of the ground on Cincinnati in last week's poll, closing the gap to four points. A few more voters jumped on board this week and, of course, it looked weird. As if voters were rewarding the Tide for mashing New Mexico State.

It was more of an overall body of work situation. Reality Check could see this coming for a while but would have preferred to make Alabama earn the ranking more than taking it from the Bearcats for not winning pretty enough.

Next: vs. Charleston Southern, Saturday.

Reality check: The Bulldogs basically have two weeks to get healthy after some of their players were nicked up or ill against Tennessee. The rivalry game against Georgia Tech figures to be not much more than a tuneup for the SEC championship.

Reality check: Comparative scores can be dicey, but Alabama against Florida and Tennessee: 83-53. Georgia against the Gators and Vols: 75-24.

Next: vs. SMU, Saturday.

Reality check: The over-analysis of the Bearcats is getting tedious and, frankly, might not matter if they actually win out. The bigger issue is not what they look like when they are winning as much as they look like a team that's going to catch an unexpected L down the stretch.

Next: at No. Utah, Saturday.

Reality check: The Ducks are looking more the part of playoff team as they control the line of scrimmage over the last three games, running for 891 yards and 6.4 per carry.

Next: vs. No. 7 Michigan State, Saturday.

Reality check: When the Buckeyes' offense gets rolling, with all those future NFL receivers such as Garrett Wilson and Chris Olave, they look like the one team in the country that could really challenge Georgia's defense. Maybe.

Reality check: One can be impressed by how well the Irish have come along in what was clearly a reset season while also acknowledging they have benefited from a back half of the schedule littered with bad defenses and sketchy quarterbacks.

Reality check: Spartans’ pass defense is not quite as bad as the yards allowed suggest (329 per game, last in the Big Ten). They are middle of the pack in yards per attempt at 6.9. Still, good luck against the best set of receivers in the country.

Reality check: Edge rushers David Ojabo and Aidan Hutchinson are tied for the Big Ten lead in sacks with 10. If you're trying to talk yourself into this being the year the Wolverines get Ohio State, the conversation starts with those two.

Reality check: Just when we embraced the Cowboys as the Big 12's answer to Iowa, defense-reliant and offensively challenged, they put up a season-high 682 yards and 7.84 per play. Though it was against TCU, the conference's worst defense.

Reality check: Rebels are a couple of victories away from a likely New Year's Six bowl. Will they get to keep coach Lane Kiffin for it?

Reality check: QB Gerry Bohanon had been a useful runner, with seven touchdowns in the first nine games before breaking out for 107 yards on nine carries against Oklahoma. Nice weapon to unsheathe in a big spot.

Next: vs. Iowa State, Saturday.

Reality check: Sooners have made the playoff four times, each one after losing a regular-season game and then winning the Big 12. They are not done yet, but freshman QB Caleb Williams has some growing to do.

Next: at Clemson, Saturday.

Reality check: QB Sam Hartman has hit a rough patch the last two weeks, throwing five interceptions and completing only 46% of his passes.

Next: at Georgia Southern, Saturday.

Reality check: Cougars are heading for a 10-win season that will likely lead to a pretty unsatisfying bowl bid considering how good they are. It's the life of an independent not named Notre Dame and why BYU is joining the Big 12.

Next: vs. UAB, Saturday.

Reality check: Roadrunners have been a great story but they still need to beat the Blazers to win their C-USA division.

Next: vs. Prairie View A&M, Saturday.

Reality check: The season has been a little bit of a disappointment, but, realistically, the rebuild along the offensive line and losing the starting quarterback to injury should have tempered expectations.

Next: vs. Memphis, Friday.

Reality check: Behind an experienced defensive line led by Logan Hall and Atlias Bell, the Cougars have been tough to run against at 3.02 per carry (eighth in the nation).

Reality check: How much of an outlier was the Purdue game for Iowa's defense? The Boilermakers' 378 yards passing is 18% of the total allowed by the Hawkeyes this season, 108 more than any other game and one of only four games in which an opponent cracked 200.

Next: vs. Nebraska, Saturday.

Reality check: Need to talk more about 17-year-old freshman RB Braelon Allen. He is built similarly to Derrick Henry (6-foot-2, 235-pounds) and is up to six straight 100-yard rushing games.

Reality check: Panthers have two productive and dangerous tight ends in senior Lucas Krull (27 catches for 339 yards and six touchdowns), whom America was introduced to in last week's OT game against North Carolina, and freshman Gavin Bartholomew (19, 228 and three).

Reality check: Razorbacks are cautious bunch, tied with Ole Miss for the fewest turnovers in the SEC with seven.

Next: at Liberty, Saturday.

Reality check: It's about to become speculation season for the Ragin' Cajuns and coach Billy Napier, who is a victory way from a third straight double-digit win season.

Next: at UNLV, Friday night.

Reality check: Matt Araiza Watch: The Aztecs' amazing punter is averaging 52.25 yards per kick, which would easily break the NCAA record of 51.0 set by Texas A&M's Braden Mann in 2018.

Reality check: QB Cameron Rising has helped Utah turn around its season, with 18 total touchdowns and only two interceptions since taking over in Game 3.

Reality check: Wolfpack held up about as well as any defense can against Wake Forest's offense and still couldn't close the deal.

A few four-loss teams, led by Mississippi State and Penn State, might be more deserving of the back-end spots of the Top 25.