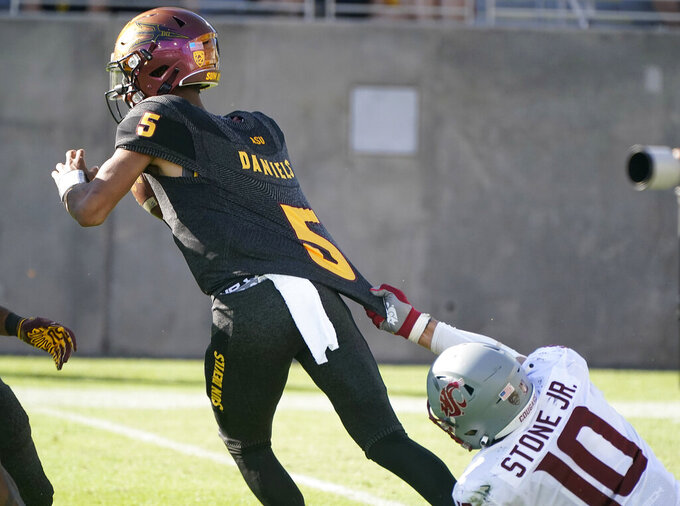 TEMPE, Ariz. (AP) — A barefoot Jake Plummer took off from the group photo and did a partial lap around his former teammates, laughing the entire way.

Plummer and crew were back in Tempe on Saturday to celebrate the 25th anniversary of Arizona State's last Rose Bowl appearance.

The performance against Washington State that followed was a sign that the Sun Devils don't seem to be any closer to ending the drought under coach Herm Edwards than they were with any other coach since Bill Snyder in 1996.

“This is our third season, football’s hard, it’s not easy,” Edwards said. “The Rose Bowl team was here this weekend and that team was 25 years ago, so that shows you how hard it is. If it was easy, it would just happen.”

Edwards was hired in 2018 to revive a program that had mild success under previous coach Todd Graham, yet had not climbed beyond the tier of Holiday, Sun and Cactus bowls.

Athletic director Ray Anderson gave a clear directive for the direction of the program under Edwards: consistently top two in the Pac-12, top 15 in the country. That meant playing for Pac-12 championships and in major bowl games.

The Sun Devils have continued to stumble trying to take that next step.

It at least started off well.

Edwards, the former NFL coach and TV analyst, shut down the doubters by showing he had the chops to coach the college game, winning on the field and a few recruiting wars.

Arizona State won seven games and went to the Las Vegas Bowl in Edwards' first season, backed that up with an eight-win season in 2019 and a win in the Sun Bowl.

The pandemic-altered 2020 season wreaked havoc on teams across the country and the Sun Devils were hit hard, unable to build any momentum though a string of postponements and cancellations. They finished 2-2, but one one of those wins was a 70-7 rout of rival Arizona.

Expectations followed Arizona State into its fourth season under Edwards. The Sun Devils had talent and depth at nearly every position, one of the Pac-12's best quarterbacks in Jayden Daniels and were ranked No. 25 in The Associated Press preseason poll.

Arizona State bounced back with wins over Colorado, UCLA and Stanford to take control of the Pac-12 South. The goal of getting to the Pac-12 Championship game seemed to be in reach.

Two straight disheartening losses now have the Sun Devils grasping for help if they're going to have a shot at winning the South.

And it wasn't just the losses. It's the way Arizona State lost.

The Sun Devils led Utah 21-7 at halftime, then bumbled through a listless second half at Rice-Eccles Stadium, watching as the Utes scored 28 straight points for a 35-21 win.

Arizona State had a bye week to sort out its issues and find a way to build momentum back against Washington State on Saturday. The Sun Devils instead stretched the flat-line performance from the second half in Salt Lake City into the first half against the Cougars.

Arizona State fell behind 28-0 — that was 56 straight points over two halves — before scoring right before halftime. The Sun Devils scored two late touchdowns to make the 34-21 loss seem closer than it actually was.

The consecutive flops, coupled with an NCAA investigation into improper recruiting, led for calls for Edwards to be fired.

But there's still a chance for redemption, at least on the field.

At 3-2, the Sun Devils (5-3) are only a game behind Utah in a Pac-12 South division where no dominant team has emerged.

“It’s about the process and where it starts,” Edwards said. “Every week you have an opportunity to win a game. The joy you feel, the accomplishment you feel as a football team to win. And we haven’t felt that.”

The talent is still there. The Sun Devils just have to find a way to get it moving back in the right direction.