Arkansas travels to BYU for 1st meeting on football field 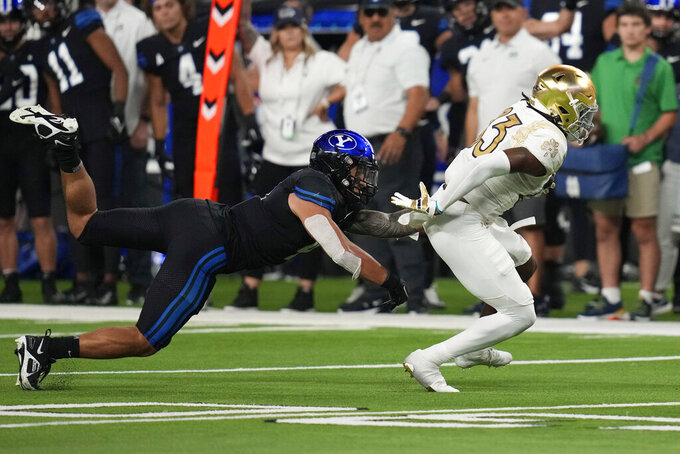 The Cougars fell out of the AP Top 25 after a 28-20 loss to Notre Dame in Las Vegas. They will try to get back on track in their first-ever meeting on the football field with Arkansas. The Razorbacks started 3-0 but have dropped three straight. BYU has a 4-6 record against teams from the Southeastern Conference. The Razorbacks are 7-0 in nonconference games under Sam Pittman.

A BYU defense led by LB Max Tooley will try to slow down Arkansas' rushing attack. TB Raheim ‘Rocket’ Sanders has an SEC-leading 695 yards and five touchdowns. He also has 14 catches for 185 yards and a score. Tooley had a career-best 13 tackles against Notre Dame.

Arkansas: LB Drew Sanders, who’s second in the nation with 6 1/2 sacks. He also has four games with 10 or more tackles, including a career-high 16 at Mississippi State.

BYU: RB Chris Brooks. The transfer from California is averaging 6.1 yards per carry and has five touchdowns. He had 1,734 yards rushing and 14 touchdowns in three-plus seasons with Cal.

Arkansas leads the SEC with 21 sacks, which is three more than Alabama. ... The Razorbacks have had a 100-yard rusher in a program-best seven straight games. Sanders has four of the seven. ... Arkansas is scoring 29.5 points per game and allowing 32.2. ... Arkansas OL Brady Latham has made 29 straight starts. ... BYU QB Jaren Hall has a 7-3 mark as a starter against Power Five teams and is 13-5 overall. ... Cougars DB Micah Harper on his team's attitude after a 4-2 start: "Our team is very disappointed at the moment, because we expect to go undefeated and nothing less. There’s still a lot of season left and a win against Arkansas this week would change the momentum of our season.”