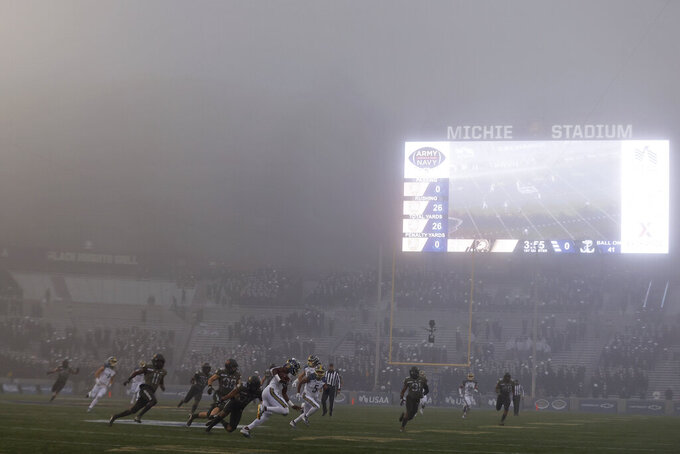 WEST POINT, N.Y. (AP) — Singing the alma mater second never felt quite like this for Army.

These Black Knights accomplished something never before done in the history of their rivalry with Navy: Beating the Midshipmen at West Point.

Tyhier Tyler scored on a 4-yard run early in the fourth quarter, the Army defense stoned Navy with a goal-line stand in the third, and the Black Knights beat their archrival 15-0 on Saturday at fog-shrouded Michie Stadium.

It was the first meeting between the teams at West Point since a 13-0 Navy shutout in 1943. The storied game is typically played at a neutral site like Philadelphia or Baltimore but the pandemic changed those plans.

The game was moved to Michie Stadium from Philadelphia because COVID-19 regulations in Pennsylvania would not have allowed the Corps of Cadets and Brigade of Midshipmen to attend.

“It’s a pretty big event to shut somebody out in this game. This has such a great history to it,” Army coach Jeff Monken said. “It was a slugfest, just back and forth. The fog rolled in. It almost seemed appropriate. for the battle that was taking place out there. It’s a lot of fun to be able to celebrate like this.”

The last two time the game was played at West Point was during World War II and the first was 1890. Army didn’t score a point in any of those games,

Navy sang second, as is tradition for the winner of the game, last year in Philadelphia after a 31-7 triumph.

“We were going to defend our house,” Army linebacker Amadeo West said. “Very fortunate. Tonight we're going to enjoy this win cause it's a very special win."

No fans were allowed, so there wasn't much of a home field advantage for the Black Knights. When the game began the Mids and Cadets were seated in groups on different sides and behind both goalposts, and the stadium literally shook after President Donald Trump conducted the coin toss and the Mids won.

Army had three weeks off to prepare after its game Nov. 7 against Air Force was switched to next Saturday because of COVID-19 concerns in and around the Air Force Academy. Navy was coming in off four straight losses.

Xavier Arline started for Navy, just the fifth freshman to start at quarterback for the Mids against Army. Tyler, who had played in four games prior to Saturday, made his second straight start.

The game turned in the third quarter with Army clinging to a 3-0 lead and on its heels after Arline ripped off a 52-yard run. He was poised to cross the goalline when Cedric Cunningham ran him down and pushed him out of bounds at the 2.

When two runs netted nothing, Navy coach Ken Niumatalolo called timeout. The Army defense then rose to the occasion again, with senior linebacker Jon Rhattigan stopping Arline inches of the goal and West stopping Nelson Smith on fourth down.

“It’s huge,” Niumatalolo said. "You don’t get that, it’s a defensive struggle. You’ve got to convert there. You have to convert.”

Army went up 3-0 on Quinn Maretzki’s 37-yard field goal early in the second quarter, set up by Tyler's 28-yard completion to Tyrell Robinson, just the second completion of his career.

Tyler scored after a Navy turnover, the only one of the game, and Daryan McDonald tacked on a safety late in the fourth when he tackled Navy wide receiver Mark Walker in the end zone on a reverse.

Neither triple option offense got untracked as fog descended low over the field and the defenses played lights-out. The teams combined for 279 yards of offense and Navy had just four first downs, half as many as Army.

Navy: The Midshipmen showed promise defensively late in the season and if Arline is the starter at quarterback next year he’ll give them a better running threat. He finished with 109 yards rushing on 17 attempts.

Army: The Black Knights have overcome a schedule that had to be almost totally revamped to rebound after a subpar 2019. Their only losses before Saturday were on the road against unbeaten Cincinnati (24-10) and Tulane (38-12). Army has won nine straight at home.

Navy senior tri-captain Billy Honaker wore No. 68 in honor of former offensive lineman David Forney, who died of cardiac arrest in his dorm room at the Naval Academy in February.

Forney's number was not issued this season, but Honaker received permission from Forney's father and Niumatalolo to pay tribute to his fallen teammate. Navy has honored Forney throughout the season by wearing a sticker on the back of its helmets that pictures him running out of the tunnel at last year's Army-Navy game carrying the American flag with the word Brotherhood underneath.

Marine One was grounded by the weather, so President Donald Trump came by motorcade. He was greeted with cheers and chants of USA! USA! as he made his way onto the field for the national anthem and coin toss and was in the stands for the opening kickoff. He first took his place with cadets on the Army side of the stadium for much of the first quarter before joining Navy midshipmen in the second quarter. He wore a face mask at times while with both groups and was accompanied by acting Defense Secretary Chris Miller before departing just before halftime.

Navy: Every team is bowl eligible this season, but the Midshipmen's season is likely over.

Army: Hosts Air Force next Saturday in the regular-season finale for the Commander-in-Chief's Trophy and is scheduled to play in the Independence Bowl the next week.