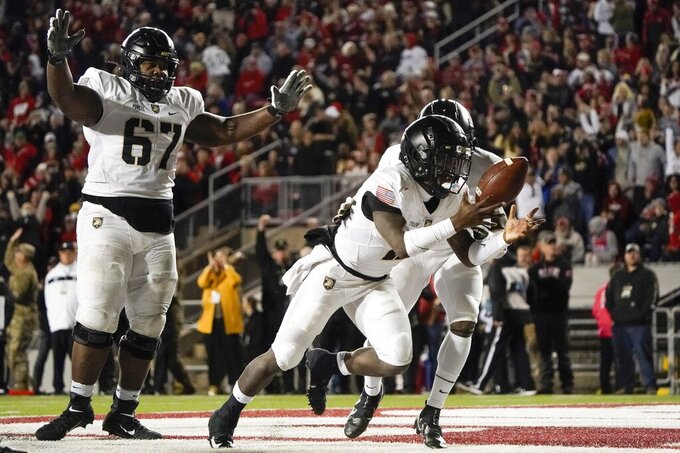 Army's Tyhier Tyler reacts after running for a touchdown during the second half of an NCAA college football game against Wisconsin Saturday, Oct. 16, 2021, in Madison, Wis. (AP Photo/Morry Gash)

WEST POINT, N.Y. (AP) — Army is at the end of a two-game stretch that's as tough as it gets for a service academy.

The Black Knights (4-2) host No. 16 Wake Forest (6-0) on Saturday, a week after losing at Wisconsin by six points in a game decided by a late Army turnover.

The Demon Deacons are just the third ranked team this century to travel to West Point, and despite the 20-14 loss to the Badgers, Army coach Jeff Monken liked what he saw in the second half in the hostile environment.

“To go toe-to-toe with a team like Wisconsin is really encouraging for our football team, and knowing that we truly did have a chance to win the football game, I think that was positive," Monken said. "I think it’s really positive that our guys, they don’t see it as a moral victory. They were sorely disappointed. They fully intended and expected to win the game. Our guys were mad that we didn’t find a way.”

Wake Forest is emerging from a bye week with the program’s first 6-0 record since 1944 – nine years before the Atlantic Coast Conference was formed – and its first 4-0 start in the ACC.

The Demon Deacons are coming off an overtime win at Syracuse that ended on A.T. Perry’s 22-yard scoring catch to cap a three-TD day. It was the second game this year they won on a late score, going back to a home win over Louisville on a field goal.

Wake Forest finds itself as the front-runner in a league race that is far more wide open than usual, with six-time reigning champion Clemson stumbling at North Carolina State and looking nothing like the offensive machine of recent years.

Coach Dave Clawson said the Demon Deacons are enjoying the moment but not getting lost in it. Defensive lineman Miles Fox sensed the same during the open weekend.

“Usually, it’s the younger guys kind of messing around a bit, getting complacent,” Fox said. “But everyone is locked in and we’re at a really good place right now.”

Army's triple option averages 295 yards rushing per game, second nationally, and operates with more than one quarterback. Against Wisconsin, it was Tyhier Tyler and Jabari Laws; for Wake Forest, Tyler and Christian Anderson get the nod.

“Using more than one quarterback is a good thing,” offensive coordinator Brent Davis said. "Guys have a chance to come to the side and watch what’s going on, so when it’s their turn to go back in they can kind of get in the flow of the game.”

Said Laws: “It’s a unique quarterback room. You won’t get this anywhere else in the country. We feed off each other’s energy.”

The Demon Deacons could get a boost with the return of defensive back Nasir Greer, who hasn’t played since the Sept. 18 win over Florida State due to injury. Clawson said the plan is for Greer to travel for the game and dress, though whether he plays could be a game-time decision.

Playing at home has seemed like a magic elixir for the Black Knights. They've won 13 straight at Michie Stadium. It's family weekend and the academy says the stadium is sold out.

“I’m glad to be playing at home and not having to travel,” Monken said. "Hopefully, that will be an advantage for us.”

The Demon Deacons are again among the best at avoiding self-inflicted mistakes. Wake Forest is tied for fifth in the Bowl Subdivision in turnover margin at plus-8, as well as ranked in the top 20 of the FBS in both fewest penalties and penalty yards per game. Army has committed just four turnovers and leads the nation in fewest penalties (21).

Clawson said Wake Forest started preparing for Army’s scheme a little earlier than a typical opponent, saying his team spent about half the time on Army and the other half on fundamentals to improve depth.

“I think our team was tired physically, tired emotionally,” Clawson said. “It was a great time for a bye week. We’ve been able to get healthy.”