Art Briles back on field in Texas, not talking about Baylor 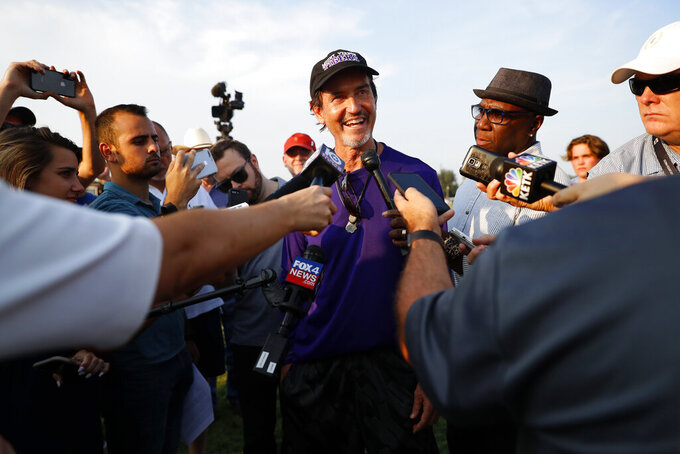 Coach Art Briles addresses the media after a team practice at Mount Vernon High School, Monday, Aug. 5, 2019, in Mount Vernon, Texas. Briles was back at his roots Monday, coaching a high school football team in Texas after a season in Italy and more than three years after the two-time Big 12 champion coach was fired by Baylor in the wake of a sexual assault scandal. (AP Photo/Tony Gutierrez)

MOUNT VERNON, Texas (AP) — Art Briles was back at his roots Monday, coaching a high school football team in Texas following a season in Italy and more than three years after the two-time Big 12 champion coach was fired by Baylor in the wake of a sexual assault scandal.

Briles is now coaching at Mount Vernon, a school just off Interstate 30 in East Texas between Dallas and the Arkansas line. He last coached high school 20 years ago, winning four state championships in Stephenville, which is located on the other side of Dallas.

"I knew there was a yes out there somewhere because I found a lot of nos. But I was just thankful that the yes was here," Briles said. "Honestly that's why I went to Italy, because it was really the first opportunity that I had. It really didn't matter to me where it was at. It's just if there's a ball that looks funny, I want to be on the field with it."

While expressing his gratitude about being home in Texas, where all of his coaching career has been except for the time in Italy, the 63-year-old Briles didn't discuss in depth his time at Baylor or departure from the school.

Attorneys Darrell Barger and Ernest Cannon said in a written statement handed out before Briles' post-practice availability that he "understands and appreciates the public's interest in what occurred at Baylor University." But they said Briles is a defendant in a civil lawsuit brought against him in July 2018 related to 2014 incidents "that the plaintiff alleges were physical (nonsexual) assault by her former boyfriend."

At practice in the Texas heat, Briles was upbeat as he tried to teach his new team — not knowing many of their names — the passing offense he has had such success with through the years. He said the kids "were unbelievable" though they certainly weren't ready to play a game. They have some time before the season opener Aug. 30 on the road.

Briles was hired by Mount Vernon on a two-year contract in May, after the school's previous coach left for his alma mater. Briles was still in Italy when he was initially contacted about the possibility by a woman from Mount Vernon who once worked with him at Baylor.

"I've been doing this a long time. If this is the last dance, I'm good with it. I was good with Italy being the last dance," said Briles, who acknowledged he knew nothing about Mount Vernon before that call. "Goose egg, I mean, actually zero."

Before that, Briles hadn't been able to land a job in coaching in the United States since being let go by Baylor, though the coach said Monday that he had "three or four opportunities" in late February. Briles didn't elaborate, other than to say they were in Texas.

"This deal just happened. I had opportunities this spring that I didn't take because I was in Italy, so I kind of just thought I'd go back over in Europe next year. Because it's not a bad deal," he said. "They love football and you play it 10 months out of the year, which I love. And the game is pretty pure. The players play because they love the game."

Briles was fired at Baylor after an external investigation revealed in May 2016 that the school had for years mishandled numerous sexual assault allegations by students, including some against football players. The Pepper Hamilton firm's investigation found at least 17 women who reported being sexually assaulted by 19 football players.

Briles has insisted he did not cover up reports of assaults by players.

Baylor, which is still waiting for the outcome of an NCAA investigation into the school's conduct, declined to comment Monday night.

Along with the statement Barger and Cannon handed out a copy of a May 2017 letter from Baylor's general counsel that the attorneys say is "a letter of exoneration from wrongdoing in any sexual assault case."

The attorneys also cited in their statement a 115-page independent investigation by Title IX consultants Margolis-Healy in September 2014 citing no such failings in the football program, but identifying "problems within Baylor's campus safety leadership."