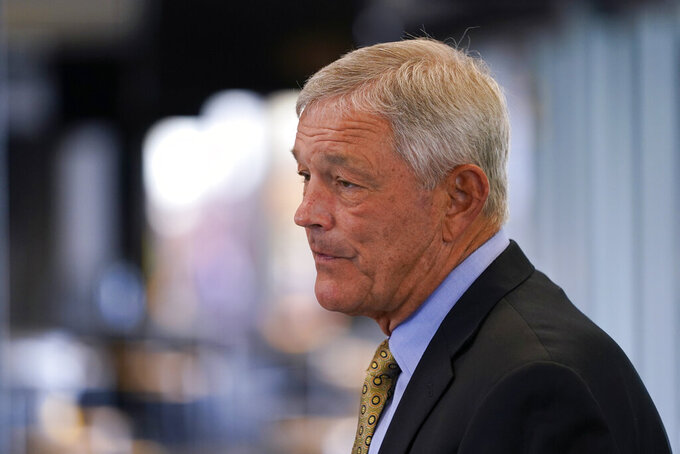 IOWA CITY, Iowa (AP) — Iowa's defense was one of the best in the nation at forcing turnovers and turning them into points.

With seven starters back on that side of the ball, the Hawkeyes would appear set to build on what it accomplished while leading the Hawkeyes to the Big Ten championship game.

Coach Kirk Ferentz said the defense is far from proven, especially considering Riley Moss is the only returning starter in the secondary.

“Before we announce ourselves ready to roll on defense,” Ferentz said, "we’ve still got some work to do.”

The Hawkeyes, who went 10-4 overall and 7-2 in the Big Ten to win the West Division, led the nation with 25 interceptions. They ranked third with 30 forced turnovers and seventh with four defensive touchdowns.

“It sounds pretty dang simple, but it’s hard to do," said middle linebacker Jack Campbell, who led the nation with 143 tackles. "When you do your job, you get in the right spot, and then when the opportunities arise, you go make plays.”

“From a quarterback perspective, one of the things they do really well is they disguise their coverage better than any opposing team I’ve played in my last two years,” Spencer Petras said. “So it forces a quarterback to have really disciplined eyes. They’re not going to show you what they’re doing. They’re going to hold it to the last possible second.”

Quinn Schulte and Kaevon Merriweather are expected to start at the safety spots, and Jermari Harris the leading candidate to play left cornerback. Cooper DeJean, who saw playing time late in the season, is expected to take over Iowa’s “Cash” position, a hybrid safety-linebacker spot the Hawkeyes have used the last two seasons.

Iowa’s secondary called itself “The Doughboys” last fall because of the way that unit cashed in on turnovers.

Logan Jones is No. 1 on the depth chart at center, replacing All-American Tyler Linderbaum.

Like Linderbaum did early in his career, Jones is moving over from the defensive line. Jones, a sophomore, reached out to Linderbaum, a first-round pick by the NFL’s Baltimore Ravens, for advice.

“I really didn’t know what I was doing,” Jones said. “(Offensive line coach George Barnett) said to just go out there and play, let your talent come naturally. And that’s what I’m trying to do.”

Ferentz expects Gavin Williams and Leshon Williams (unrelated) to be the running back tandem that takes over for Tyler Goodson, who declared for the NFL draft after rushing for 1,151 yards.

“Once you get past Gavin and Leshon, we have no experience,” Ferentz said.

Ferentz declared the quarterback competition “open” after last season. Petras struggled with consistency. He started 11 games and threw for 1,880 yards, but he had 10 touchdown passes against nine interceptions and completed just 57.3% of his attempts.

Alex Padilla, who got three starts when Petras was injured late in the season, is No. 2 on the depth chart.

Petras went to the Manning Passing Academy over the summer, and Ferentz likes what he has seen from him so far in fall camp.

The Big Ten schedule includes an Oct. 1 home game against Michigan in a rematch of last season’s conference championship game, won by the Wolverines 42-3. Iowa, which is just outside the rankings in the preseason AP Top 25, also plays at Ohio State for the first time since 2013.

The opener is Sept. 3 at home against South Dakota State, with the Cy-Hawk game against Iowa State the next week in Iowa City.