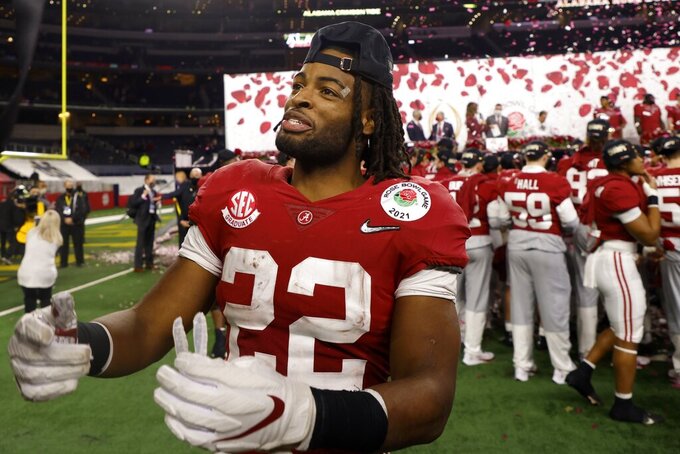 Alabama star receiver Jaylen Waddle has returned to practice. Now the question is will he be able to play in the title game Monday night against Ohio State?

Crimson Tide offensive coordinator Steve Sarkisian says Waddle practiced on Tuesday, but he deferred questions on his status to coach Nick Saban, who did not address the media on Wednesday.

“We’ll see where it goes from here,” Sarkisian said. “Clearly we’ve got about a week or so until the game.”

Waddle hasn’t played since breaking his right ankle while returning the opening kickoff against Tennessee on Oct. 4. One of the nation’s most dangerous return men, he had surgery after the game.

In his absence, DeVonta Smith went on to put up big enough numbers to win the Heisman Trophy on Tuesday. That would put the onus on the Buckeyes to defend that formidable pair.

“I think you absolutely have to prepare as if he's going to play,” Ohio State defensive coordinator Kerry Coombs said. “He's an extraordinary athlete, extraordinary receiver.”

Waddle had 557 yards and four touchdowns in the Tide's first four games, while opponents mostly kicked away from him.

Waddle has made three of the program’s five longest scoring catches. His career average of 19.1 yards per catch ranks second among Tide players with at least 100 receptions. He also has returned two punts and a kick for touchdowns in his career.

“I think he’s getting back into it,” Smith said. “Of course he’s going to take some time just for him to get back comfortable with everything, but he looks good to me.”

Quarterback Mac Jones agreed. Neither player offered an opinion on whether Waddle would play.

“It’d be really cool,” Jones said. “Jaylen has worked really hard to get back on the field and I know he wants nothing more than to play, but I think they’re just going to make that decision downstairs.

“But it’s his choice, and I feel like in watching him, he looks really good out there. So we’ll see what happens.”

A day after a report raised the possibility of the College Football Playoff championship being delayed because of COVID-19 issues at Ohio State, Buckeyes athletic director Gene Smith told The Associated Press he anticipated the game will go on as scheduled.

AL.com first reported Tuesday that Ohio State had reached out to CFP officials with concerns about player availability when the Buckeyes face No. 1 Alabama on Monday night in Miami Gardens, Florida. A person with knowledge of the situation confirmed those discussions to the AP, but Smith and CFP Executive Director Bill Hancock both released statements saying there was no change to the schedule.

Smith declined to provide any details about what virus-related problems Ohio State might be facing, but he did say the team practiced Wednesday.

“I can’t wait to join Buckeyes around the world on Jan. 11 in cheering on this very special team,” Johnson wrote.

The West Coast will be well represented in the national championship game among the players, if not the football programs themselves.

Harris, for one, misses the California sunshine, but he has no regrets about his trading the West Coast for the Southern humidity — and football.

“They say a lot of West Coast guys can’t play in I guess conferences like this, the SEC,” said Harris, who was fifth in the Heisman Trophy voting. "So I wanted to like kill that hype, I guess, in a way and show that we can play, that West Coast people can play.

“We have a lot more guys from the West Coast playing in the SEC than before, so it’s good to see a lot of guys travel across.”

Coombs, who has been coaching football for nearly three decades, says Ohio State's Justin Fields is among the best quarterbacks ever.

Fields, the second-year Buckeyes starter and likely first-round NFL draft pick, added to his resume on Wednesday when he was named the winner of the 2020 Chicago Tribune Silver Football award as the best player in the Big Ten.

“He's got command of the offense, he understands where we want to distribute the ball,” said Coombs, who was an assistant with the NFL's Tennessee Titans last season after a five-year stint on Urban Meyer's staff at Ohio State. “He's one of the best quarterbacks I've ever seen and been around, and we've been around some really good ones here. He's truly gifted.”

BATTLE IN THE TRENCHES

“It will be won in the trenches, no doubt,” said Garrett, who recovered from a gunshot wound to the face in August to become one of the leaders of the Buckeyes' defense.