Baylor holds on for Big 12 title, knocks Okla St out of CFP 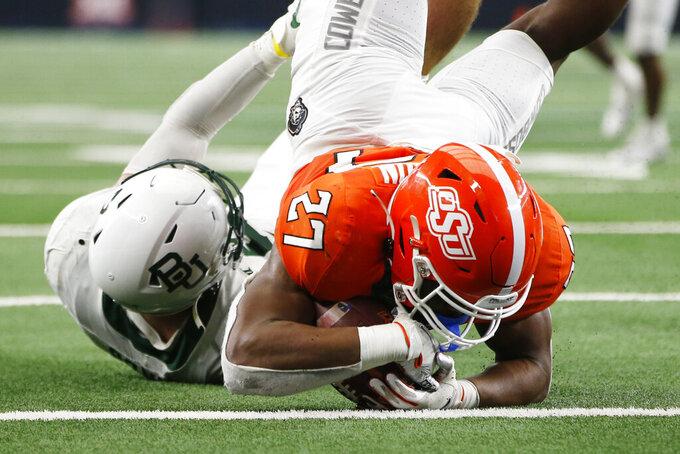 Oklahoma State running back Dezmon Jackson (27) is tackled by Baylor linebacker Dillon Doyle short of the goal line in the second half of an NCAA college football game for the Big 12 Conference championship in Arlington, Texas, Saturday, Dec. 4, 2021. (AP Photo/Tim Heitman)

ARLINGTON, Texas (AP) — Dezmon Jackson came up inches short on a desperate, fourth-down dive in the final seconds for Oklahoma State, knocking the fifth-ranked Cowboys out of contention for a spot in the four-team playoff.

Baylor safety Jairon McVea knocked Jackson out of bounds without letting him reach the pylon with 24 seconds remaining in the Big 12 championship game Saturday, preserving a 21-16 victory for the ninth-ranked Bears a year after they won only two games in coach Dave Aranda's debut season.

“This moment is something they can never take away,” Bears linebacker Terrel Bernard said.

After the Bears (11-2, CFP No. 9) won their third Big 12 title, they didn't get the chaos needed for them to have a chance to make the final four for the first time in the College Football Playoff rankings Sunday.

Alabama (CFP No. 3) and Georgia (CFP No. 1) were likely set for the playoff after the Crimson Tide handed the Bulldogs their first loss in the SEC title game. Michigan (CFP No. 2) overwhelmed Iowa in the Big Ten title game, and future Big 12 team Cincinnati (CFP No. 4) remained the only undefeated team by winning the American Athletic Conference.

Aranda recalled Oklahoma State coach Mike Gundy telling him “that winning is hard” before an earlier meeting between the teams. The Big 12 title game was a sure example of that.

After having first-and-goal from 2 following a pass interference penalty, Jackson gained a yard and was held for no gain before an incomplete pass by Spencer Sanders.

On fourth down from the 1, Jackson tried to sweep wide left, but with McVea in pursuit, he barely missed while trying to reach the pylon in the front corner of the end zone.

“When I saw the running back with the ball, I thought I’ve got to run this guy down,” said McVea, who wasn’t even sure where the ball was when the tackle was made. “The ref signaled not a touchdown, so when I saw that I was pretty happy.”

Gundy said Baylor made a good play and that, "It’s not 27′s fault,” referring to Jackson.

Sanders threw four interceptions, one by McVea, and the Cowboys were without leading rusher Jaylen Warren because of his lingering ankle and shoulder issues.

Baylor's 11 wins match a school record and came after the 2-7 record last year, when the pandemic wiped out spring drills when Aranda was coming off a national championship as LSU's defensive coordinator.

The Bears won with 242 total yards of offense, only 36 after halftime. Shapen finished 23 of 28 for 180 yards passing overall.

Oklahoma State led 3-0 on Tanner Brown’s 23-yard field goal set up after all-purpose back Trestan Ebner fumbled on a run for Baylor on the opening drive of the game. Sanders threw picks on the next two drives, setting up Baylor with short fields for three-play TD drives — a 2-yard TD pass to wide-open tight open Ben Sims and Drew Estrada’s 4-yard scoring catch.

Baylor's 21-3 lead, and the Cowboys' largest deficit this season, came after an incredible diving 13-yard TD catch by Tyquan Thornton with a defender on his back with 5 1/2 minutes left in the first half.

The Cowboys got within 21-16 on Brown’s 20-yard field goal with 8:17 left. That was set up after Ebner muffed a punt recovered by Korie Black, who had ended the first half by deflecting a field goal attempt that came up woefully short.

McVea had his interception early in the second half, but Baylor failed to get a first down. Instead of punting from their own 36, the Bears went for it on fourth down and Shapen had to just throw the ball away without an open receiver. Eight plays later, Dominic Richardson scored on a 4-yard run for the Cowboys.

“I told the team in the locker room how proud I was that they’ve done everything we’ve asked them to do since January,” Gundy said. “Came up just a few inches short."

The Bears finished last season with a 42-3 home loss to Oklahoma State.

Asked if he could contrast the way last season ended with how his second year played out, Aranada simply said: “No.”

Baylor: The Bears won the 2013 Big 12 title outright and shared in 2014 with TCU, both of those coming during a six-season stretch when there wasn't a championship game for the conference. Baylor lost to Oklahoma in the title game two years ago.

Oklahoma State: Sanders had seven interceptions in the two games this season against Baylor, though the Cowboys won the first meeting 24-14 on Oct. 2. The first pick Saturday was right to the defender, and the second one was picked off by leaping linebacker Matt Jones when Sanders was pressured and tried to throw off his back foot toward the sideline. The other two interceptions were tipped passes. ... Oklahoma State had only 70 yards rushing on 40 carries (1.8 yards per carry).

Baylor: Headed to their second Sugar Bowl in three years.

Oklahoma St.: Waiting to find out which bowl game awaits.