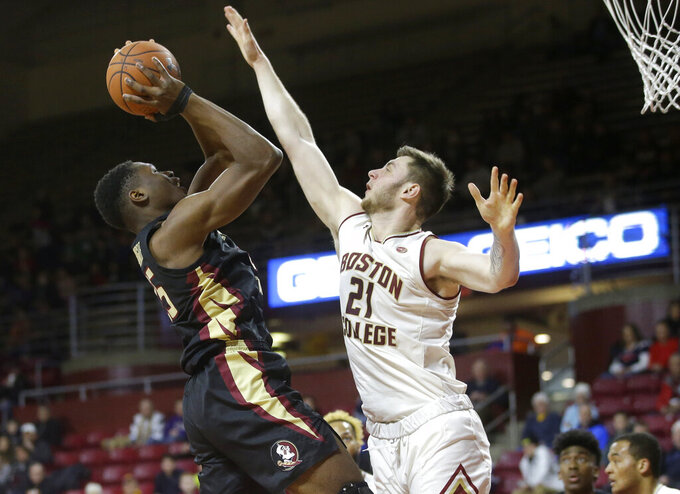 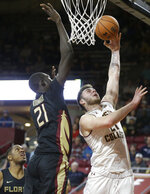 BOSTON (AP) — With just over a minute left and No. 11 Florida State rapidly closing the gap, an unlikely contributor popped onto the court to help Boston College hold on for a victory.

Running back AJ Dillon, the Atlantic Coast Conference's preseason football player of the year, got out of his courtside seat and wiped down the floor while the teams lined up for a free throw, drawing a chuckle and a cheer from the crowd.

"We needed all hands on deck," coach Jim Christian said after the Eagles upset the Seminoles 87-82, the third time in two seasons BC has beaten a ranked team in Chestnut Hill. "Could have used him in the post."

Ky Bowman scored 37 points and Jordan Chatman gave BC the lead for good by hitting three straight 3-pointers during a 21-4 run to start the second half that sent the Seminoles (13-5, 1-4 ACC) to their third straight loss.

BC (10-7, 1-4) led by nine with 87 seconds left before a pair of turnovers against the full-court press allowed FSU to make it a four-point game.

But freshman Wynston Tabbs made a 3-pointer with 24 seconds remaining to turn back the rally and snap the Eagles' five-game losing streak. The Eagles also got some help from Nik Popovic, who at 6-foot-11 was able to dribble through the press in the second half and made five of his six free-throw attempts to ice it.

(And then there's Dillion, who ran for 149 yards and a touchdown the last time Florida State's football team visited Chestnut Hill.)

"I think what's clear, first and foremost, we've got to have everybody healthy and we've got to play well," Christian said. "This is the ACC. There's not one or two guys that carry any team. Everyone has to help for our team. I thought everybody contributed."

Chatman, who went 0 for 5 from the field in the first half, scored 15 of his 17 points in the second — making all five 3-pointers he attempted after the break.

With a snowstorm that dropped up to 7 inches on the area over Saturday night and into the morning, a sparse crowd at the Conte Forum came to life only in the second half, when Chatman hit three straight from beyond the arc to give the Eagles a 57-50 lead they never relinquished.

"We knew that Chatman would get hot," Seminoles coach Leonard Hamilton said. "He just stayed hot."

Bowman scored 18 points and grabbed five rebounds in the first half, when BC opened a 19-13 lead before the Seminoles scored eight straight points in 70 seconds to go in front. The Eagles guard finished with nine rebounds and played all 40 minutes.

"I've never seen a guy play 40 minutes five games in a row and in the fifth game get 37," Hamilton said. "We worked our butts off trying to keep him from getting the ball. We overplayed him, denied him, everything we could. He's that type of talent. He kind of drives the engine."

After Bowman gave the Eagles a 24-23 edge, Florida State scored 12 in a row and 17 of the next 18 points. The Seminoles took a 46-36 lead into the break but missed their first five shots of the second, and BC cut the deficit to four points.

Florida State: A last-second defeat to top-ranked Duke was understandable, but the Seminoles may drop out of the Top 25 entirely after losses to Pittsburgh and Boston College. It does get a little easier: They leave the state of Florida only once in the next four weeks after traveling to Virginia, Pitt and BC this month.

"Anytime you start with your first three games on the road, you can get in a big hole this early in the season," Hamilton said.

Boston College: The Eagles have shown they can beat ranked teams — especially at home. They head to Wake Forest before games against Syracuse, Notre Dame and Syracuse again, so they may have to savor this for a while.

"It just builds confidence in each player, believing in one another and what it takes to beat one of the top teams in the ACC," Bowman said.