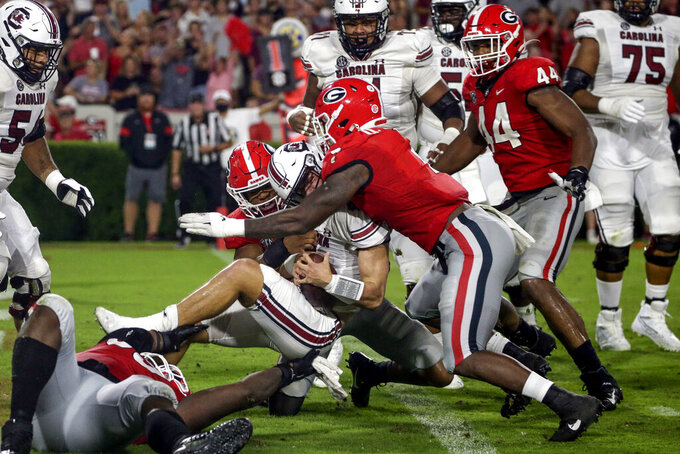 South Carolina quarterback Luke Doty (4) is tacked by linebacker Nolan Smith (4) and Georgia linebacker Quay Walker (7) in the end zone for a safety during the first half of an NCAA college football game Saturday, Sept. 18, 2021, in Athens, Ga. (AP Photo/Butch Dill)

Anderson said the Bulldogs can generate much more havoc.

“We can get so much better,” Anderson said Monday before Georgia (3-0, 1-0 Southeastern Conference) began its practice schedule for Saturday's visit to Vanderbilt (1-2, 0-0).

“Most people would say we are doing well, but there are still things we can improve on.”

South Carolina coach Shane Beamer didn't see much room for improvement in the Georgia defense following the Bulldogs' 40-13 win over his Gamecocks on Saturday night.

The Bulldogs were dominant even while allowing their first touchdown of the season on defense. Following the game, Beamer just shook his head and said, “They’re big and physical and fast. I mean, other than that, they’re really freaking good. That’s why they have the top defense in the country.”

Anderson, a senior outside linebacker, leads the defense with three sacks and nine pressures. The defense already has 13 sacks and five interceptions but Anderson wants to see even more of those “havoc plays.”

“I think there are still things to work on,” Anderson said. “For one, getting more turnovers. ... We’re trying to make more havoc plays. How can we help our offense out by getting them on the field even more?”

In Georgia's season-opening 10-3 win over Clemson, the defense also took care of most of the scoring. Cornerback Christopher Smith's 74-yard interception return provided the game's only touchdown.

Linebacker Nolan Smith, who forced a fumble against South Carolina and has two sacks this season, joins Anderson as leaders of the defense at linebacker.

“My brother. Part of my wolfpack,” said Anderson of Nolan Smith.

Beamer was astonished at Georgia coach Kirby Smart's long list of top-rated players, including the massive duo of Jordan Davis (6-6, 340) and Devonte Wyatt (6-3, 315) on the defensive line.

“They’ve got like 100 5-star football players on their defense,” Beamer said.

Sometimes the depth may make it difficult for a backup to earn significant practice time behind the starters. Smart says that may mean those backups volunteer to work on the scout team defense against Georgia's top offensive linemen.

“And when you’ve got players in your program texting you, ‘Coach can I get some good work against Warren McClendon or Jamaree Salyer?’ that’s when you know you got a good culture,” Smart said Monday.

"They’re trying to get reps against better people rather than staying down with the defense. ... For me, that is everything we’re about, that’s what our culture is built on. It’s built on how you go against better players so that you get better and that’s how we get depth because they practice against good people.”

It may be difficult to stand out in the crowd of defensive players expected to draw attention in the next NFL draft. Sacks are one way to gain attention.

Anderson set a preseason goal of 20 sacks. That number sounded unrealistic when it is remembered Jarvis Jones set the school record of 14 1/2 in 2012. Azeez Ojulari led the Bulldogs with 8 1/2 sacks in 10 games last season before being a second-round draft pick by the New York Giants.

Anderson said Monday he didn't want to set his sights too low.

“That’s a record I want to break,” Anderson said of Jones' mark. “I’m excited to see what I can do.”