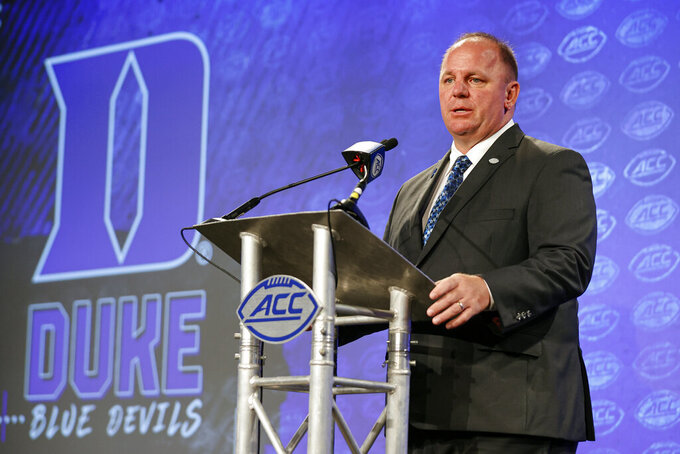 DURHAM, N.C. (AP) — It wasn’t long ago that Duke was a regular bowl team that had seemingly moved past years of struggle. Mike Elko has to figure out how to get the Blue Devils back in that position.

The program has slid back into its former losing state as the 14-year run of David Cutcliffe fizzled in the final two seasons, leading the 45-year-old first-time head coach to build a new foundation.

“It's been a really hard two years between COVID and everything these kids have been through, not having success on the field,” Elko said. "We've just tried to pump energy back in it.

“How? You just demand a certain level of excitement. ... The next thing, we've got to create confidence because then confidence will allow you to sustain success.”

Cutcliffe certainly showed it can be done. Duke went from winning two games over three seasons before his arrival to winning its Atlantic Coast Conference division championship in 2013 amid a run of six bowl trips in seven seasons. But the Blue Devils have lost 23 of 29 games dating to October 2019, including 21 of 23 in the league.

Elko previously coached in the ACC as defensive coordinator under Wake Forest’s Dave Clawson, spent a season at Notre Dame in the same role and then at Texas A&M under Jimbo Fisher.

He inherits a team picked to finish last in the ACC's Coastal Division featuring four new coaches. Among the most pressing issues to fix: the Blue Devils are minus-26 in turnover margin the past two seasons, including a national-worst 39 turnovers in 2020.

Elko has spent time, too, trying to engage with fans in hopes of building “a product and an experience that people want to be a part of.” Of course, it all starts with upgrading the on-field play.

“We’re working together trying to figure out what works best for this program, what we’re going to do to win,” defensive tackle DeWayne Carter said, “and how most importantly, we can be successful on and off the field.”

With last year's starter Gunnar Holmberg having transferred to Florida International, the Blue Devils have little quarterback experience under new coordinator Kevin Johns. They also need to find a replacement for running back Mataeo Durant, who ran for 1,241 yards and nine touchdowns.

QB Riley Leonard has seven games and one start under his belt as he battles fellow sophomore Jordan Moore in preseason camp. Moore saw reserve action in 10 games last season. he is Duke's leading returning rusher (221 yards) and versatile enough to take some preseason reps at receiver.

The Blue Devils return their leading tackler in linebacker Shaka Heyward (98 stops), who has 29 career starts to offer experience in a 4-2-5 scheme now directed by coordinator Robb Smith. There is also Carter's return as a fourth-year junior, who had 4.5 sacks as the team's top defensive lineman last year.

Defensively, Duke added to the secondary with Darius Joiner (Western Illinois, Jacksonville State) and Datrone Young (Iowa State). Joiner was a first-team Associated Press All-American for the Championship Subdivision last yea r at Western Illinois, while Young started 25 of his 43 career games with the Cyclones.

Elko will have experience to work with on special teams with the return of kicker Charlie Ham and punter Porter Wilson. Ham has made 27 of 35 field goals over the past two seasons, while Wilson ranked 24th in FBS by averaging 44.8 yards per punt last year.

The Blue Devils open ACC play Oct. 1 against Virginia and close the season at home against No. 22 Wake Forest on Nov. 26.