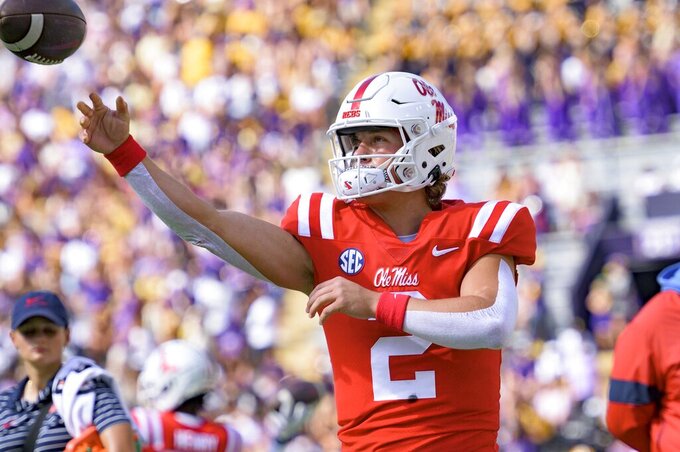 Daniels ran for three touchdowns and passed for two scores, and LSU roared back from an early two-touchdown deficit to hand No. 7 Mississippi its first loss this season, 45-20 on Saturday.

The performance gave Daniels the LSU record for touchdowns rushing in a season by a quarterback with nine. Daniels also has accounted for 11 TDs rushing or passing combined in the span of two games. He had three of each in a 45-35 victory at Florida last weekend.

“I expected that," Daniels said of his newly established school record and his prolific two-game stretch. “I know what I’m capable of doing.”

Reveling in the resounding triumph over a historical and highly-ranked rival, LSU fans stormed the field as the game ended. Now LSU (6-2, 4-1 SEC) is back in the race to win the SEC West — if the Tigers can beat No. 6 Alabama.

After being outgained 200-80 in the first quarter and falling behind 17-3 on Jonathan Cruz's field goal to start the second quarter, LSU outscored Ole Miss (7-1, 3-1) 42-3 the remainder of the game.

“You can see the resilience in this team,” Daniels said. “Once we get going, we’re hard to stop.”

Ole Miss was trying to start 8-0 for the first time since 1962, but coach Lane Kiffin was left to lament his team's collapse after a strong start.

“"I said all week they had elite players and it will be difficult to win against these guys," Kiffin said of the Tigers. "We got pushed around. ... They did a really good job and we didn’t do a lot right defensively. It obviously wasn’t a good feeling at the end.”

The Tigers finished with 500 total yards to 404 for Kiffin's vaunted Mississippi offense. LSU rushed for 252 yards and finished with 35 first downs.

Daniels passed for 258 yards and ran for 121. His scoring passes went for 34 yards to Jaray Jenkins and 1 yard to tight end Mason Taylor. He ran for touchdowns of 3, 11 and 17 yards, the longest all but salting the game away in the fourth quarter.

Nearly everything went right for LSU in the second half. Even linebacker Harold Perkins' unsportsmanlike conduct penalty after a third-down stop at the Rebels' 15-yard line early in the fourth quarter couldn't turn the tide in the Rebels' favor. Down 11 points at the time, Ole Miss wound up having to punt anyway minutes later.

Daniels then drove the Tigers 75 yards for a touchdown to make it 38-20.

“The offensive line was outstanding and put the game away at the end," Kelly said.

LSU’s defense battered Ole Miss QB Jaxson Dart in the second half. The Rebels QB finished 19 of 34 for 284 yards. With Ole Miss driving for a potential go-ahead TD in the third quarter, Dart was intercepted in the LSU end zone by Joe Foucha on a pass thrown under pressure from linebacker Micah Baskerville.

“Sometimes you don’t expect to get hit when you are throwing it,” Dart said. “I just wasn’t able to get enough on it.”

After first-quarter touchdown runs of 3 and 6 yards by Quinshon Judkins, Ole Miss was threatening to go ahead 21-3 when LSU's stuffed Dart's keeper on third-and-5 from the LSU 13, limiting the Rebels to a field goal.

The Tigers then rallied to tie it before Cruz's 48-yard field goal gave Mississippi a 20-17 lead that stood until halftime.

Kiffin and Dart both noted how LSU's Perkins, a true freshman who had a sack, two QB hurries and a pass break-up, affected the game.

“He isn’t like anyone else out there,” Kiffin said.

Added Dart, "Coming out of high school he was the best linebacker in the country so he is very talented. They kind of set him up as a spy and a rusher and he made some good plays.”

Mississippi: Oddsmakers apparently had been unimpressed with Ole Miss' schedule through its first seven games. Mississippi was listed as a slight underdog at Tiger Stadium and LSU covered by more than three touchdowns.

LSU: Kelly has the Tigers playing their best football on the heels of what could have been a demoralizing 40-13 loss at home to No. 3 Tennessee. LSU also won for the third time this year after trailing by 13 or more.

LSU is off next weekend before hosting No. 6 Alabama on Nov. 5.