Familiar place: No. 25 Boise St back in poll, travels to AFA 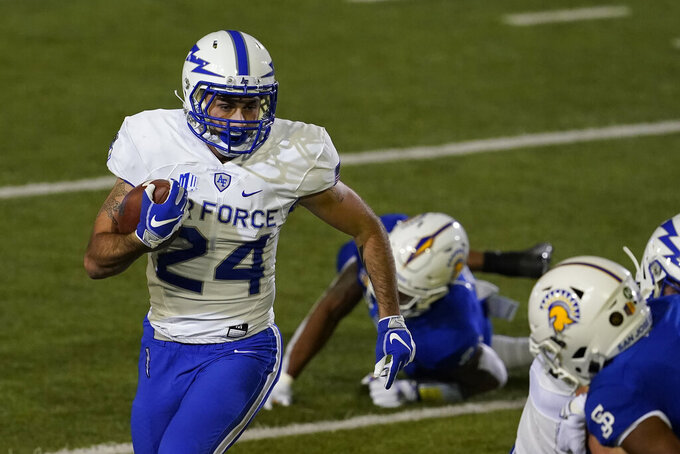 AIR FORCE ACADEMY, Colo. (AP) — Bryan Harsin had a novel idea for his players — so he started a book club.

The Boise State coach even led the group discussions as the younger players joined him in reading Joshua Medcalf’s “Chop Wood Carry Water: How to Fall in Love with the Process of Becoming Great.”

The 25th-ranked Broncos are all on board with that concept as they travel to Air Force on Saturday for a Mountain West showdown.

Harsin and the Broncos (1-0, 1-0 MWC) returned to the rankings following a 42-13 win over Utah State last weekend. It’s the 19th straight season in which the Broncos have appeared in the poll for at least a week.

The streak spans coaches from Dan Hawkins to Chris Petersen to Harsin. It stretches from players such as Ryan Dinwiddie, Kellen Moore, Doug Martin, Brett Rypien and current QB Hank Bachmeier. Their particular ranked streak is tied with USC for the seventh-longest in the country. Ohio State leads the way with 53 straight seasons.

“That’s where we want to be,” said Harsin, whose program is 118-21 all-time when nationally ranked. “I do appreciate the recognition that we get for getting a chance to be in one of those polls. We’ve got to keep finding ways to win so we can stay."

It's always a challenge going against Air Force and its unique triple-option offense. The Falcons (1-1, 0-1) romped over Navy 40-7 on Oct. 3 before losing three weeks later at San Jose State 17-6.

“I feel like seeing San Jose was a good thing, because when you’re going against scouts, you can’t see that real speed and the over-the-top passing that San Jose did,” said Air Force defensive back Elisha Palm, who picked off his first career pass against the Spartans. “It will help us a lot getting ready for Boise State.”

As for the “Bryan Harsin Book Club,” it wasn’t an official class or anything, just something else to occupy the time during the COVID-19 pandemic. He had quite a turnout, too.

“All the young players were awesome. They were totally into it,” Harsin said. “They actually had really good insight. And there was good conversation that came out of it among each other, which to me, that is an example of a successful class.”

To prepare them for success on the road, Harsin and his staff have been giving them a crash course on what to expect once they arrive at the hotel and at Falcon Stadium, where the cadets will be the only ones in attendance.

“We have a tremendous respect for Air Force, their players, their coaches, and we’ve got to make sure that we’re ready to go out there and play our best football because we know what type of team they are,” Harsin said. “We have to see how we handle the success from this last game leading into this week.”

Both the Broncos and the Falcons have streaks riding on this game. Air Force has won nine straight home games, with their last loss on Nov. 10, 2018.

Boise State has a 10-game winning streak in Mountain West play, which is the longest by the Broncos since joining the league in 2011.

By beating Utah State last weekend, Boise State moved into the lead by percentage points as the winningest program in college football history.

BACKS IN ACTION, PART I

The Broncos have produced a 1,000-yard rusher in 11 straight seasons.

Air Force is fifth in the nation with a 287.5-yard rushing average. Leading the way is fullback Timothy Jackson with 178 yards on 34 attempts. QB Haaziq Daniels has 121 yards.

“They’re going to run the ball. So that’s known,” Harsin said. “And we have to cover, obviously, when they do throw it, because I believe their quarterback, Daniels, can spin it.”