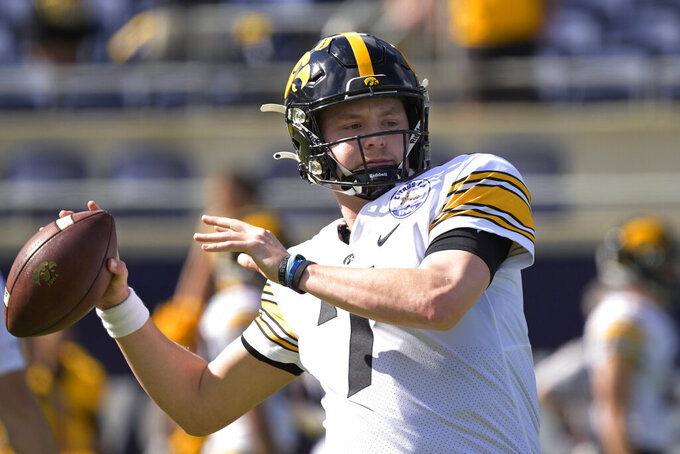 FILE - Iowa quarterback Spencer Petras warms up before the Citrus Bowl NCAA college football game against Kentucky, Jan. 1, 2022, in Orlando, Fla. Iowa’s offense struggled with consistency last season. The work in the offseason has been about improving that behind Petras and a young line. (AP Photo/Phelan M. Ebenhack, File)

Iowa is flying under the radar despite winning the Big Ten West last year. It's not an unfamiliar position for the Hawkeyes, who often win ugly year in and year out. The Hawkeyes can't count on their defense generating as many takeaways as it did a year ago, so offensive improvement is a must. South Dakota State presents a big challenge. The Jackrabbits are ranked in the top three of the FCS polls and one of two programs to make the FCS playoffs each of the last 10 seasons, including the semifinals or final four of the last five years.

South Dakota State: QB Mark Gronowski, who missed last season because of injury, returns as the starter. He led the Jackrabbits to the FCS title game in the 2021 spring season and was named Missouri Valley Conference offensive player of the year.

Iowa: WR Alec Wick is a walk-on who made a fast rise on the depth chart and could get significant playing time if Keagan Johnson is limited or can't play. The Hawkeyes already are missing injured starter Nico Ragaini.

Iowa has won 19 of its last 21 openers. ... The Hawkeyes are playing an FCS opponent for the first time since 2018 (Northern Iowa). ... Iowa has intercepted 89 passes since 2017, most of any team. The Hawkeyes picked off a school-record 25 passes last season. ... SDSU is 2-9 against Bowl Subdivision opponents since moving to Division I in 2008. The Jackrabbits beat Colorado State 42-23 in last year's opener. ... SDSU LB Adam Bock, who grew up 12 miles north of Iowa City in Solon, made a team-leading 125 tackles with 9.5 tackles for loss and 2.5 sacks.