Ferentz not shutting door on Petras' return for No. 18 Iowa 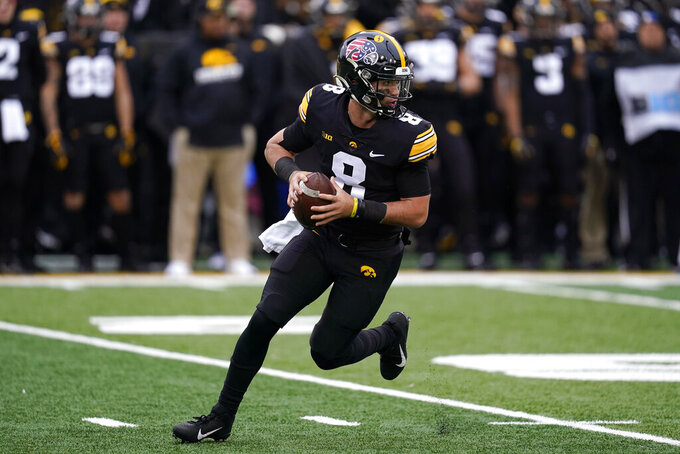 IOWA CITY, Iowa (AP) — Alex Padilla is set to make his second straight start at quarterback when No. 18 Iowa hosts Illinois this week.

That doesn't mean the Hawkeyes have moved on from Spencer Petras.

Coach Kirk Ferentz said Tuesday he'll have to decide, possibly soon, whether to bring back Petras, who started 17 consecutive games before a shoulder injury knocked him out of most of the Nov. 6 win at Northwestern and all of last week's 27-22 win over Minnesota.

Petras isn’t listed on the depth chart this week but has been working with the No. 2 offense in practice, Ferentz said.

“Alex is running with the ones, so we’re just trying to get Spencer back in the groove a little bit,” Ferentz said. “He’s there mentally, obviously. We’re just trying to work through some missed time. (Petras) has missed some throws he normally would make. We’ll see where it goes. But we’re comfortable with both guys.”

Padilla was just 11 of 24 for 206 yards against Minnesota but threw for two touchdowns — a 72-yarder to Charlie Jones and a 27-yard catch-and-run completion to Keagan Johnson. Padilla also ran for a TD.

“It’s tough to come into a position like that, in the middle of the season, and get his first couple of starts,” Jones said. “But he’s doing a good job, staying calm, making the plays that he needs to make, not doing too much. Not letting the hype get to him.”

Padilla has been able to get key players involved in the passing game. He found eight different receivers for completions at Northwestern, and he targeted eight against Minnesota, with six catching at least one pass. Tight end Sam LaPorta, the team's leading receiver last season, has had six catches over the last two games.

Ferentz said he wasn’t concerned about Padilla’s completion percentage against the Gophers.

“I thought he played effectively,” Ferentz said. “He just shows poise out there, which is what you hope for from your quarterback.”

Ferentz said he also is judging Padilla’s play by the intangibles, whether it’s his mobility to get out of the pocket, or the presence of mind he has to avoid a sack. Padilla wasn’t sacked by Minnesota after being sacked twice in three-plus quarters against Northwestern.

“Those are little things, but they’re really big,” Ferentz said. “Negative-yards play, they hit you. Not just the yards, but there’s an emotional tug to them.”

Petras has been the starter since the beginning of the 2020 season but has struggled with consistency. He has completed 57.6% of his passes, with 18 career touchdown passes against 11 interceptions. He has averaged 177.9 passing yards per game.

Petras was injured late in the loss at Wisconsin. He started against Northwestern, completing just 2 of 4 passes for 4 yards in three series before Padilla took over.

Petras was medically cleared to play against Minnesota but was still sore from the injury.

“He’s gotten a lot of work,” Ferentz said. “The key thing was, he wasn’t sore today. He hasn’t been tackled yet, which is another one of the wild cards out there.”

Ferentz said the biggest concern for Petras is getting back his accuracy after missing practice time.

“A week ago, he couldn’t throw the ball down the field,” Ferentz said. “It looks like his strength is good. It’s just a matter of getting back in the groove.”

For now, the discussion of the future will wait.

“The way I’m looking at it, I think we have two guys. I think I speak for everybody. I think we all have confidence in both players,” Ferentz said. “They’re good guys — they’re invested and good players. Spencer’s got a good resumé, and now Alex has got one started here, and so that’s a positive for us.”