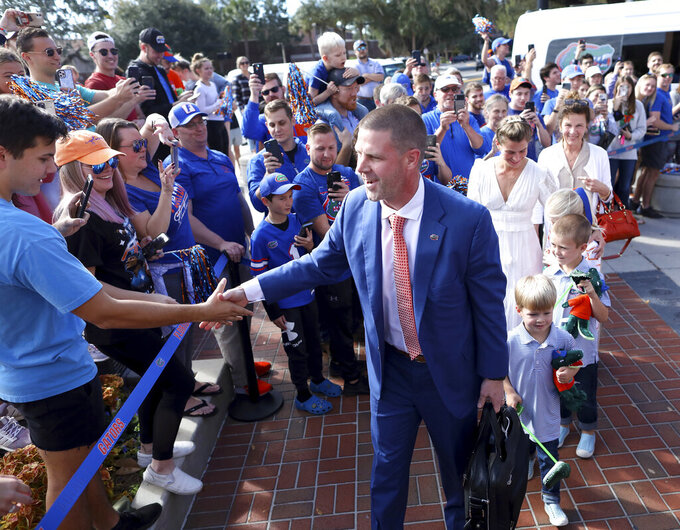 Napier never expected it to become his catchphrase, one that would follow him from Lafayette, Louisiana, to Gainesville.

“I’m never going to live that down,” Napier said Monday.

It all started just before halftime of Louisiana-Lafayette’s home game against Ohio in mid-September. Napier’s Ragin’ Cajuns were at the Ohio 1-yard line with just a few seconds to go in the second quarter. Leading 14-3 lead, Napier easily could have settled for a chip-shot field goal and a two-touchdown lead.

Instead, he made the decision to keep his offense on the field and told his assistants over the headset that “scared money don’t make money,” repeating an old investment phrase that gained popularity in gambling circles and reached a broader audience when rapper Young Jeezy included it his “Scared Money” song in 2009. Louisiana scored, barely.

Napier was then asked about his aggressive approach during a halftime interview and repeated the phrase on camera. It’s caught fire and has stayed with him since.

“The big thing is that these decisions are very calculated,” Napier said. “We work closely with several analytics companies. We spent a ton of time in the offseason researching all the different things that affect playing winning football and certainly going for it on fourth down is one of those things that we’ve researched really closely and certainly a part of our formula to win.

“I think growing up playing cards, playing poker, lots of different types of poker, I’ve heard that said many times and all of a sudden it comes out of my mouth on national TV.”

The quote quickly became all the rage in Lafayette, making its way onto T-shirts and sweatshirts.

And when Napier was hired at Florida a little more than two months later, it was once again front and center. Fans used it to express their support on social media. Quarterback Anthony Richardson used it to show his commitment to the new regime.

The phrase was shouted at Napier as he and his family deplaned in Gainesville on Monday and again as he stepped out of a van outside Florida Field and did the “Gator chomp.”

Although Napier seemed slightly embarrassed by all the attention “scared money” has received, he finally decided to embrace it. He didn’t have much choice.

“Yeah, I think it’s going to help me justify all these times I go for fourth down and don’t get it,” he joked. “That’s what it’s going to do.”

That part would be in character for him, one former player said.

“He’s a very aggressive guy,” said current Jacksonville Jaguars defensive back Michael Jacquet, who played two seasons for Napier. “I know everyone heard ‘scared money don’t make no money.' That kind of describes him all in one. He’s really not scared of anything. That’s one man that doesn’t fear any team, any guy. He believes in the group that he has.

“It’s nothing but the best for Florida; they got them a good one for sure.”