Florida's Richardson has concussion, uncertain to play at SC 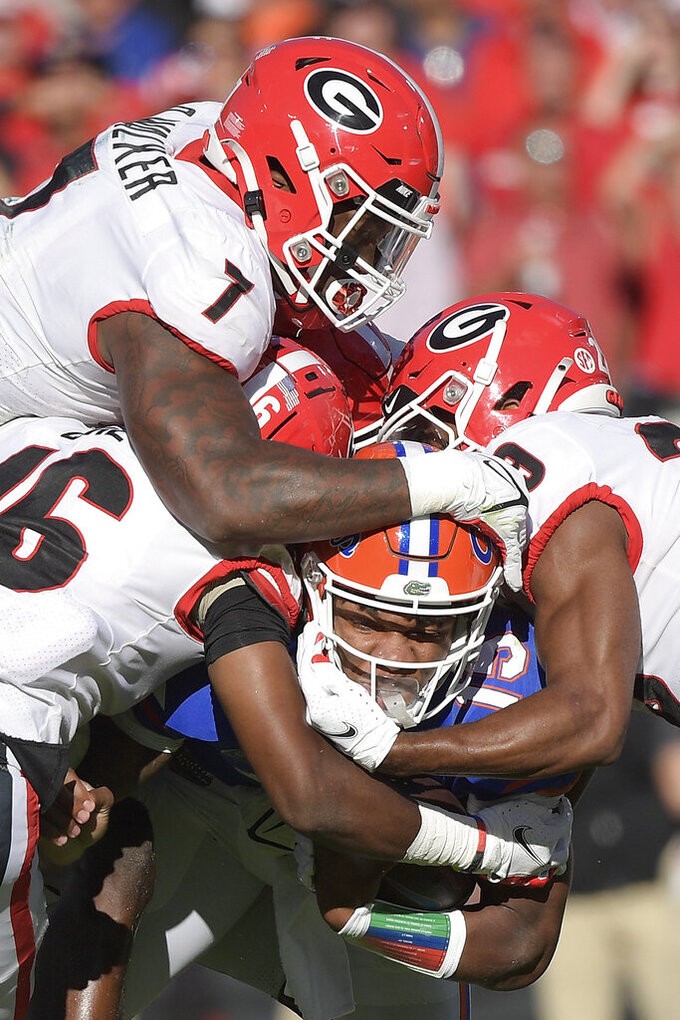 GAINESVILLE, Fla. (AP) — Florida quarterback Anthony Richardson is recovering from a concussion, potentially opening the door for Emory Jones to start at South Carolina on Saturday.

Richardson was knocked out of last week's 34-7 loss to top-ranked Georgia following a hit to the head/neck area. He was diagnosed with a concussion and sat out practice Monday and Tuesday.

Jones played well off the bench, completing 10 of 14 passes for 112 yards. He also ran for Florida's lone score.

Coach Dan Mullen raved about Jones' attitude since getting replaced by Richardson last month, saying he's handled the move even better than expected.

“His character, his work ethic, his demeanor is unbelievable,” Mullen said during the Southeastern Conference's coaches call Wednesday. "You look at Saturday and very easily as a young guy you can sit there and say, ‘Hey, this is not exactly the situation that I was hoping to be in right now.’ That wasn’t his case at all.

“We had a discussion. He said, ‘Coach, I’m 100% all-in. I’m ready to go. I’m prepared. You point at me to get in that game, I’ll go execute and play. I’m ready to go.’ ... It just shows his character and the type of young man that he is that he was prepared for that moment.”

Jones started the first seven games of this season, but had nearly as many interceptions (9) as touchdown passes (10). Richardson replaced him in a loss at LSU on Oct. 16 and is expected to be the guy going forward.

Richardson, a 6-foot-4, 236-pound freshman from Gainesville, has completed 58% of his passes for 474 yards, with five TD passes and five interceptions. Jones and Richardson also are the team's top two rushers, with Jones leading the way with 516 yards and three scores.

No matter who starts against the Gamecocks, the Gators are looking for a turnaround down the stretch. Florida is expected to be favored by double digits in each of its four remaining games: at South Carolina, against Samford, at Missouri and against Florida State.

“The winning momentum, I think, is huge," Mullen said. "That's always such a big deal. We’re dealing with young kids. We have a lot of young players and momentum can carry them a long way. Momentum has a lot to do with the confidence they play with on the field.