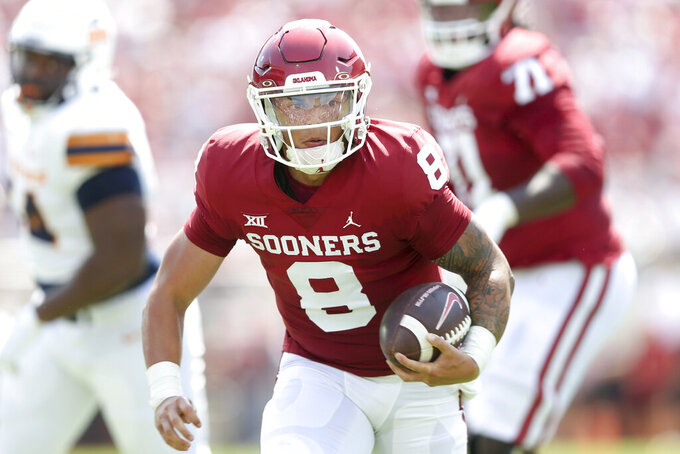 Dillon Gabriel looked quite comfortable in his first game for Oklahoma.

The Central Florida transfer passed for 233 yards and two touchdowns and ran for another score as the Sooners topped UTEP 45-13.

Gabriel said he wasn't worried about playing in the spotlight as the quarterback for a program that has produced four Heisman Trophy winners at the position in the past 20 years.

“I think I was so focused on preparation and on the game and doing my job,” he said. “But, you know, after I looked back, man, that was just a day I’ll never forget and just a great feeling.”

He looks to get even more comfortable on Saturday when the 7th-ranked Sooners (1-0) host Kent State (0-1). Gabriel was actually more concerned heading into the opener about getting back into the flow after missing most of last season with a broken collarbone.

“It really didn’t feel like a long time away from the game,” he said. “That was good. But definitely, at the start of any new season, there’s kind of those six months of not getting touched. Into the first drive, I got a little hit. It’s all good. It’s part of the game. It’s something that kind of just feeds me.”

Gabriel led an offense that gained 492 yards against UTEP. His successful debut with the Sooners is what Kent State coach Sean Lewis expected.

“A guy that’s seen a lot of different pictures, he’s played in a lot of different venues," Lewis said. "And so the stage and the moment and the expectations and the standards that being a tier one quarterback has at this high level, at a prestigious blueblood program like Oklahoma, he embraces and he welcomes.”

Kent State is coming off a 45-20 loss to Washington. The Golden Flashes, among the favorites to win the Mid-American Conference title, want to show they are better than that performance.

“I love how hard they play and compete regardless of the score,” Oklahoma coach Brent Venables said. “I mean, they play incredibly hard, chase the ball on defense and on offense, man, they’re going to keep coming at you, throwing haymakers.”

The Sooners' Reggie Grimes had 2½ sacks last week as his grandmother, Barbara Grimes, watched. She has been diagnosed with cancer for a second time, and she put off treatment to watch him play.

Kent State decided to practice in Tulsa, Oklahoma, at the beginning of the week instead of returning to Ohio, and it created an opportunity. Lewis planned during the week to take the players to Black Wall Street, part of the prosperous Greenwood District in Tulsa that white mobs burned down in 1921.

“I think when you step into these roles as coaches ... You’re an educator first and foremost before you do anything else with ball," Lewis said. “We’re fortunate use the game of ball to teach life lessons.”

Oklahoma running back Eric Gray posted his first game with at least 100 yards last week against UTEP. The senior, who transferred from Tennessee before the 2021 season, gained 102 yards on 16 carries against the Miners.

Gray put on weight in the offseason, something he doesn't think the Miners anticipated.

“They were watching film from last year and they didn’t know,” he said. “Now they know.”

Oklahoma right tackle Wanya Morris missed the opener with an off-the-field issue. Venables said Morris still is working through it, but he should be back “sooner than later.” Morris is first string on the newest depth chart.