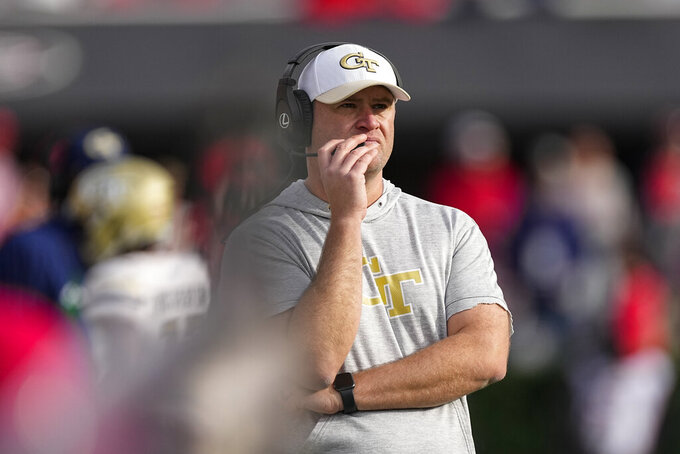 Georgia Tech interim head coach Brent Key looks on from the sideline during the second half of an NCAA college football game against Georgia, Saturday, Nov. 26, 2022 in Athens, Ga. (AP Photo/John Bazemore)

Georgia Tech named interim coach Brent Key to the full-time position on Tuesday after he led the team to a 4-4 finish.

Key, 44, was in his fourth season as assistant head coach, run game coordinator and offensive line coach before Geoff Collins was fired on Sept. 26, two days after the Yellow Jackets lost 27-10 to Central Florida and dropped to 1-3.

Georgia Tech's improvement under Key, who played for the Yellow Jackets and graduated in 2001, convinced Institute President Dr. Ángel Cabrera and athletic director J Batt to make Key the full-time coach instead of looking outside the program for the hire.

“I am so proud and grateful to be the head coach at my alma mater, Georgia Tech,” Key said in a statement released by the school. “Like I’ve said many times over the past two months, I love this team, and I couldn’t be more excited to be their head coach. We will work unbelievably hard to make our fans, alumni and former players very proud of this program.”

Cabrera said Key's history with Georgia Tech as a student, player and assistant coach was important.

“As an alum, he understands and cares deeply about this place and our extraordinary student-athletes," Cabrera said. "He’s not only incredibly competitive but will do everything he can to make sure students grow as athletes, professionals and human beings.”

“There was strong interest from across the country to be the next head coach at Georgia Tech, and we conducted an exhaustive national search,” Batt said. “At the beginning and end of the search, it was clear that the best choice for Georgia Tech is Brent Key.”

ESPN was first to report Georgia Tech had focused its search on Key.

Even in the loss, Georgia Tech's improvement showed. The Yellow Jackets trailed Georgia only 10-7 at halftime.

Key was Alabama's offensive line coach from 2016-18 following 11 seasons at UCF. At UCF, Key coached under George O'Leary, who was his coach at Georgia Tech.

“I watched very closely this season as Brent took over and saw things move in the right direction,” O'Leary said. “It was clear that the team responded to the changes he made and played hard for him.”