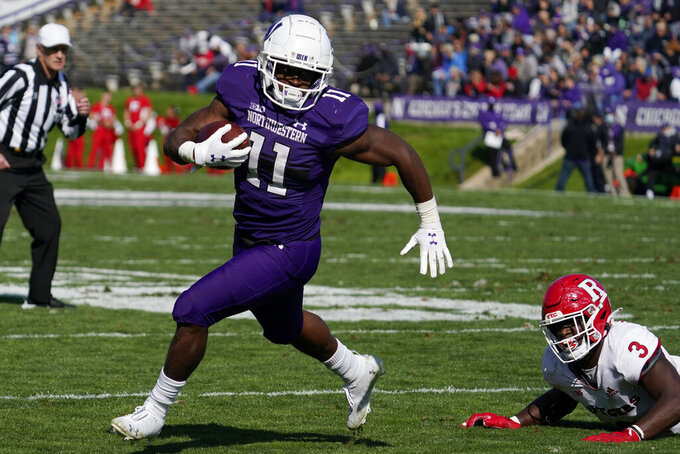 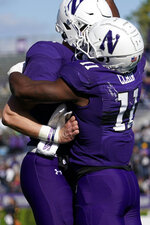 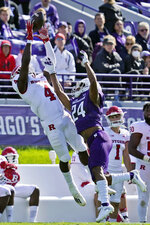 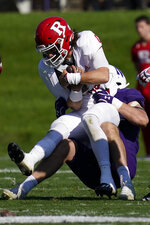 EVANSTON, Ill. (AP) — Ryan Hilinski threw for 267 yards and two touchdown passes on Saturday afternoon to boost Northwestern to a 21-7 victory over Rutgers.

Hilinski, making his third start since transferring from South Carolina, opened the scoring for the Wildcats (3-3, 1-2 Big Ten) by capping off a 98-yard drive in the first quarter, hitting Malik Washington for a 64-yard touchdown pass. The completion — Hilinski’s longest as a Wildcat — helped his team secure its first conference win of the season.

“I think one of the biggest things is that we’re continuing to have fun,” Hilinski said. “This is a game we played when we were 5 years old. I personally play best when I’m having fun and just recognizing that this is a game we’ve been playing our whole lives.”

Washington plowed through a downfield defender on his touchdown grab and finished with 84 receiving yards on five catches. Fellow wideout Stephon Robinson Jr. had 115 yards, taking pressure off a Wildcats rushing attack that struggled to get going throughout the day. Often a key to Northwestern’s offensive approach, the ground game combined for just 135 yards on 48 attempts.

“Really proud of the squad,” Northwestern coach Pat Fitzgerald said. “The way they bounced back this game and these last couple weeks. I thought they put a ton of work in to get better fundamentally. We were able to carry our preparation over into the game.”

Northwestern appeared to be a favorable matchup for the Scarlet Knights (3-4, 0-4 Big Ten), who were coming off three consecutive games against opponents currently ranked in the top 10. But with five of its first six drives ending in punts, Rutgers couldn’t muster enough offense to avoid opening conference play with four straight losses. Though quarterback Noah Vedral hit all four of his passes on Rutgers’ only scoring drive of the game, he put together an altogether inconsistent day, going 18 of 30 for 152 yards.

“It’s very disappointing,” Rutgers coach Greg Schiano said. “We certainly have to assess where we are and why we’re here, and see what we can do to fix it. Some of it is personnel, some of it is execution. We’re trying to find an answer.”

Marshall Lang added a 2-yard touchdown reception in the second and Andrew Clair’s fourth-quarter TD run padded the lead for Northwestern, which led 14-7 at halftime.

The Scarlet Knights came up short on an opportunity to tighten the game in the third, as Valentino Ambrosio missed a 33-yard field goal after a delay of game penalty forced the team to scrap an attempt to go for it on fourth down.

Rutgers: After losing four straight, the Scarlet Knights’ 3-0 start to the season is drifting further into the rear-view. Ending this skid will require improved play from a defense which has allowed a combined 1,531 yards over its last three games. Another shaky performance from Vedral means coach Schiano likely won’t be dodging questions about a QB swap anytime soon. Rutgers will get a chance to regroup with a bye this coming week, followed by a visit to Illinois.

Northwestern: The Wildcats needed a win to salvage their season after being blown out by Nebraska on Oct. 2. They got one Saturday, thanks to Hilinski and improved play from a Wildcats defense that allowed just 222 total yards. While one strong showing against an average Rutgers offense won’t solve all of Northwestern’s defensive concerns, the performance can certainly serve as a building block. The Wildcats will need to maintain as much momentum from the victory as possible, as their next three weeks include games against two top-10 opponents in Michigan and Iowa.

Hilinski opened the year at third string for the Wildcats, but has seen his weekly pass yardage climb with each start. Northwestern cycled through three quarterbacks within its first three games, and will need stability at that position if it wants to recover from a shaky start to the season. With yet another productive performance, Hilinski may just be able to provide that for the Wildcats.

PROPS TO THE PUNTER

Fresh off winning the Ray Guy Punter of the Week award for the third time this season, Rutgers punter Adam Korsak put forth another solid effort on Saturday. He logged 403 yards on nine punts, four of which landed inside the 20-yard line.

Rutgers entered the game tied with the second-fewest penalties in the Big Ten this season, but was flagged frequently Saturday. The Scarlet Knights were hit with 11 penalties for 91 yards, including an unsportsmanlike conduct penalty for sideline interference that helped Northwestern keep a fourth-quarter scoring drive alive.

Northwestern: At Michigan on Saturday.