Hoosiers try to fight back after dismal opening loss to Iowa 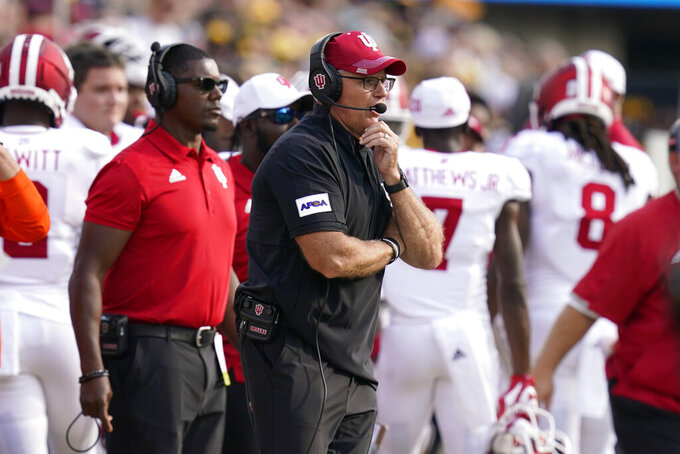 He provided the critique, bluntly discussed the necessary corrections and then sent the players home with the message it was time to move on.

Forgetting the lingering images and emotions from Saturday's dismal 34-6 season-opening loss at No. 18 Iowa won't be easy, but Allen knows it's a must if the Hoosiers hope to rebound against Idaho.

“You wake up feeling awful, you just do," Allen said. “But to me, it’s more about once you have a chance to address it and watch the film and talk about it openly and honestly. I think it’s really critical the way they leave and that, to me, is what I was focusing on — how they walked out of the facility. I want to make sure that that experience is flushed, good or bad, and we’re now ready to move on to our next opponent."

Clearly, there's plenty of cleanup work to do if Indiana hopes to meet its preseason hype. At No. 17, the Hoosiers entered last weekend with their highest preseason ranking since 1969 and routinely made it clear they hope to end Ohio State's four-year reign atop the Big Ten Conference.

Now, just one game into the season, that top goal already is in jeopardy.

Indiana (0-1, 0-1 Big Ten) trails traditional East Division powers No. 4 Ohio State and No. 19 Penn State by one game and is still facing a daunting first-half schedule. (The next AP Top 25 college football rankings come out Tuesday.)

After Idaho, the Hoosiers host No. 8 Cincinnati before back-to-back road trips to Western Kentucky and Penn State, where Indiana never has won. Following the bye week, Indiana hosts Michigan State and Ohio State.

At least quarterback Michael Penix Jr. remains confident after his worst career start. He finished 14 of 31 with 156 yards, a 68.1 passer-efficiency rating and a career-high three interceptions including two returned for touchdowns.

“I’ll learn from it," Penix said. “We’ll stay positive, stay together. We didn’t go out there pointing fingers at one another. We know we’re going to be ready for Idaho and we're going to go out there and play our football.”

But finding solutions could be complicated by some missing pieces.

Safety Devon Mathews, a three-year starter and third-team all-conference selection last season, left the game in the first half and didn't return. On Monday, Allen told reporters Mathews was taken to a hospital, where his mother joined him. Allen said Mathews was diagnosed with an upper body injury and a timeline for his return was uncertain.

“They’re on their way back actually this morning. so got a lot of good news from that," Allen said. “I don’t know the short term as far as return-to-play status yet, but I do know we’ve got a lot of good test results back, which was very, very positive."

Indiana also played Iowa without starting offensive linemen center Zach Carpenter, a transfer from Michigan, and offensive tackle Luke Haggard. Allen didn't disclose the nature of their injuries and wouldn't say whether he expected either to return this weekend.

Their absences certainly took a toll, though. While Penix was sacked once in his first game back from a second torn ACL in his right knee, he faced steady pressure and the offense never got in sync.

Allen isn't planning major changes this week — at least not yet. Instead, he's simply trying to get the Hoosiers focused on fixing mistakes and playing to their own usually high standards.

“We just didn’t block good enough," Allen said. “We didn’t sustain our blocks. We were working with the right people most of the time but just not able to stay on them. To me, it was receivers, it was the tight end, the low line. It’s everybody, the quarterback carrying out his fakes. All the little things you’ve got to do. It's got to get better."