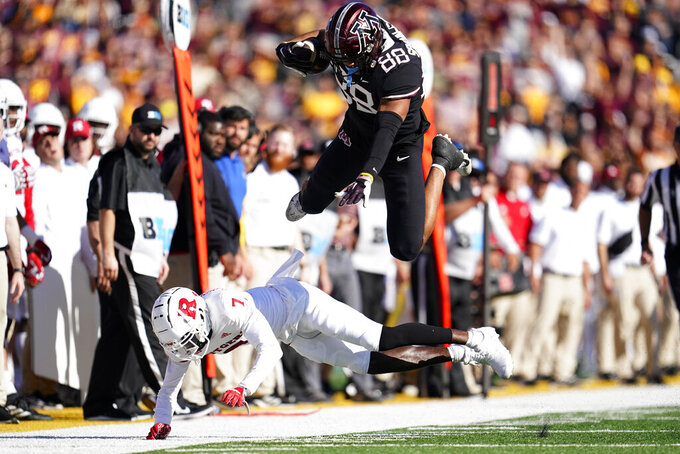 Minnesota tight end Brevyn Spann-Ford (88) is tackled by Rutgers defensive back Robert Longerbeam (7) during the first half of an NCAA college football game, Saturday, Oct. 29, 2022, in Minneapolis. (AP Photo/Abbie Parr)

MINNEAPOLIS (AP) — There aren't many accomplishments left at Minnesota for Mohamed Ibrahim.

Ibrahim rushed for 159 yards and three touchdowns on 36 carries to lead the Gophers past Rutgers 31-0 on Saturday for their first win in four weeks.

After grinding his way back from a torn Achilles tendon in the 2021 season opener and playing through an ankle injury earlier this month, Ibrahim turned in some of his finest work to date against a Scarlet Knights team that entered the game ranked sixth in the FBS and third in the Big Ten in rushing defense. The sixth-year star extended his streak of 100-yard games to 16 straight.

“I feel good,” Ibrahim said. “I do my best throughout the whole week just to get better and better each day, and then I come out on Saturdays and see where we’re at.”

Quarterback Tanner Morgan crisply returned from a concussion that kept him out of the previous game for the Gophers (5-3, 2-3), who enjoyed a 19-play, 99-yard drive on their first possession that drained 10:24 off the clock.

“That’s kind of something that we pride ourselves on, being to play that kind of ball,” Morgan said.

The Gophers converted 13 of 19 third downs and were in full control on this sun-drenched 69-degree afternoon, turning the second half into a snoozer and giving coach P.J. Fleck a victory over his mentor and former boss Greg Schiano. The Gophers had the ball for 41:02, the third time they've topped 40 minutes this season.

“I’m really proud of their resolve,” Fleck said. “There’s a lot of teams that can really spiral after that.”

Gavin Wimsatt made his second career start for Rutgers (4-4, 1-4), going 6 for 17 for 68 yards. He threw the first of two interceptions by Tyler Nubin at the Rutgers 33 early in the fourth quarter that set up Ibrahim's third touchdown — the 46th of his career — for a three-score lead.

Ibrahim seized the all-time program record from Darrell Thompson, who cheered the feat from his perch in the radio broadcast booth. Thompson had 43 touchdowns in 44 games. Ibrahim has played in 35 games, with four or five left.

“Fifteen teams before us in a row couldn’t slow him down, right? We knew that was a tall order, but we were confident that we were going to do it,” Schiano said. “They did a very good job schematically.”

Rutgers punter Adam Korsak showed off his Australian-bred leg strength, with a 77-yard punt in the first quarter that landed 2 yards short of his own program record. Korsak has five of the 11 longest punts in Rutgers history.

The field position hardly helped. The Gophers responded with a 13-play, 86-yard drive on their second possession. After Scarlet Knights made their first third-down stop of the game, Ibrahim muscled his way in on fourth-and-goal from the 1 for a 14-0 lead.

“The way that he just makes it look effortless is honestly amazing,” Nubin said. “People on the outside aren’t going to understand how he does it. People think, ‘That’s just Mo,’ but on the inside you see how hard that guy works, how hard he pushes other people, how dedicated he is, just the way that he carries himself.”

Brown will have season-ending foot surgery next week, Schiano said. Wimsatt is also in recovery mode, after a shoulder-to-shoulder hit at the end of a run caused his head snap back hard against the turf midway through the fourth quarter. The sophomore was replaced by Noah Vedral, the sixth-year player who started the previous three games.

Rutgers: The Scarlet Knights had just 134 total yards of offense in the type of game that got offensive coordinator Sean Gleeson fired earlier this month. Wimsatt was frequently out of sync with his receivers, who didn't do him many favors.

“Some of them were a little high and some of them needed to be caught. Drops, they’re inexcusable at this level,” Schiano said.

Minnesota: Morgan, who was knocked out of the 26-14 defeat at Illinois on Oct. 16, bounced back from a couple of rough performances prior to his injury. He went 14 for 21 for 122 yards and rushed three times for 17 yards without a turnover. Between Morgan and freshman Athan Kaliakmanis, who took the helm in the 45-17 loss at Penn State last week, the Gophers averaged 13.7 points over the previous three games while completing only 33 of 73 passes with seven interceptions.