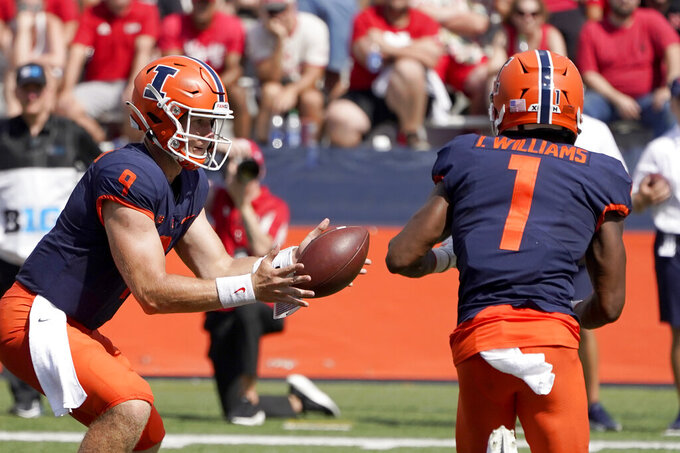 Illinois quarterback Artur Sitkowski tosses the ball to wide receiver Isaiah Williams in the backfield for a touchdown reception during the second half of an NCAA college football game against Nebraska Saturday, Aug. 28, 2021, in Champaign, Ill. Illinois won 30-22. (AP Photo/Charles Rex Arbogast)

But questions linger in Champaign. Is Illinois as good as it looked in beating the Huskers with its backup quarterback? Is Nebraska really that bad?

Some of those questions may be answered Saturday night when an underrated and dangerous UTSA opens its season at Illinois (1-0, 1-0 Big Ten).

In his first year as coach last year, Jeff Traylor led the Roadrunners to a respectable 7-5 record. UTSA had one of the best running attacks in college football, ranking No. 18 in the nation and gaining 216 yards per game on the ground.

Traylor understands his opponent and was full of praise for Bielema, who coached at Wisconsin before a stint at Arkansas.

“Illinois is a very coach Bielema-looking team,” Traylor said. “He’s won three Big Ten championships at Wisconsin and took Arkansas to three bowl games in a row. Watching that Nebraska game, you can tell he’s already made his presence felt at Illinois. They are a good football team.”

UTSA is above all else a running team. The Roadrunners are led on the ground by running back Sincere McCormick, who carried 249 times for 1,467 yards and 11 touchdowns in 2020.

UTSA is known for holding onto the ball. The Roadrunners only averaged 0.9 turnovers per game in 2020, 12th in the nation.

If there is a weakness in the Roadrunners’ offense, it’s the passing game. Last year, UTSA threw for just 193.6 yards per game, which ranked No. 99 in the nation.

Senior Frank Harris is back at quarterback. While his team concentrates mostly on the running game, with Harris rushing for 528 yards last season, he can pass when he needs to. Harris had a 63.6% completion rate last year, when he threw for 1,630 yards.

Illini starter Brandon Peters went down early in Saturday’s game against Nebraska with an injury to his left (non-throwing) shoulder. While Bielema wouldn’t completely rule him out for the UTSA game, he seemed to indicate that Rutgers transfer Artur Sitkowski, who shined against the Huskers, would be making his first start at Illinois.

In three seasons at Rutgers, Sitkowski threw eight touchdown passes and 20 interceptions. Last week, he was 12 of 15 passing for 124 yards, two touchdowns and no picks.

“Art’s a guy that was just impressive once he got here, so I wasn’t surprised at how he handled the moment,” Bielema said. “I didn’t know how he was going to play (against Nebraska), but I knew the handling of it wouldn’t be an issue. It’s just his demeanor. He’s so serious, but he also has a good light to him.”

Sitkowski took his coach’s praise in stride, but made it clear he’s already moved on.

“It’s just one game,” Sitkowski said. “We gotta look forward to UTSA. It’s a long season and we have a lot of things we have to do. That game’s behind us.”

Much of the buzz early this season has been about the newly configured Illinois receiver corps. Along with several starters returning, former QB Isaiah Williams was converted to receiver to take advantage of his speed and athleticism. The move paid off and Williams made six catches for 41 yards and a touchdown against Nebraska.

Also moving to wideout is speedy defensive back Marquez Beason, who had a summer hamstring injury. Beason began practicing with the team on Tuesday, but Bielema wouldn’t say if he can be ready on Saturday.

“He is making great strides,” Bielema said. “We’re hoping to get him back sooner rather than later.”

Illinois has 41 seniors on its roster, including 21 super seniors who received an extra year of eligibility because of the pandemic. The super seniors represent the most in Power Five. Illinois’ 20 other seniors still have one year of eligibility remaining following this season -- if they choose to use it -- and are listed as juniors on the roster. Combined, Illinois and UTSA will field 77 seniors.

“They obviously mirror us, in that we are both veteran football teams. I don’t think I’ve seen that many seniors on the field before,” Bielema said.