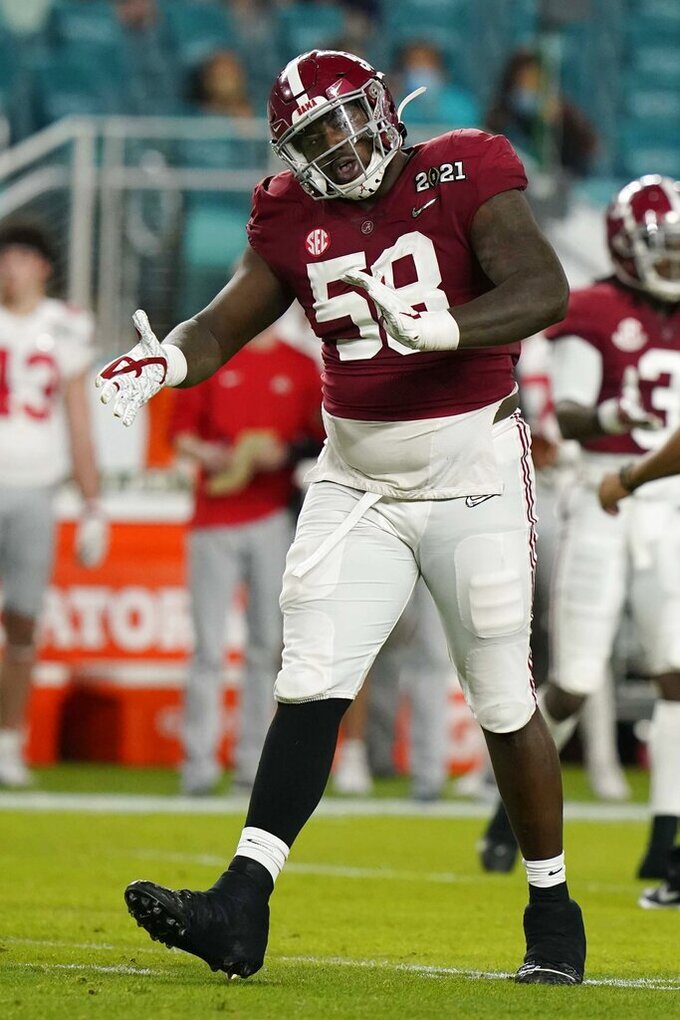 Jones arrived as a skinny recruit along with much more heralded prospect Tua Tagovailoa, a No. 5 overall pick by the Miami Dolphins last season. Both played behind young quarterback Jalen Hurts, now with the Philadelphia Eagles.

“It’s just been a great journey,” said Jones, who finished third in the Heisman voting.

Jones put together the most prolific season of any Tide quarterback in his only full season as starter. He was college football's most efficient passer and also led the nation with 4,500 passing yards and a 77.4% completion rate.

He said he is ready for the next step.

“Coach (Nick) Saban's been educating all of us since we stepped on campus so we're very aware of how the draft works and things like that,” Jones said. “And we all want to play in the NFL.”

Jones passed for 41 touchdowns and had just four interceptions. Th quarterback, who has a master's degree in sports hospitality, had one of his best performances in the national championship game win over Ohio State.

He competed 36 of 45 passes for 464 yards and five touchdowns in the 52-24 win. Jones won both the Davey O'Brien Award and the Johnny Unitas Golden Arm Award.

“Since I was a kid, my lifelong dream was to play in the NFL,” said Surtain, whose father Patrick Surtain Sr. is a former NFL player.

”I leaned on him a lot,” Surtain said of his father. “He’s been through this before. I asked him a lot of questions leading up to this process. He’s guided me the right way.”

Barmore was the defensive MVP of the national title game, where he had a sack and a pair of tackles for loss. Barmore led the team with eight sacks and had three pass breakups and three forced fumbles.

“This was a very difficult decision for me because I love my brothers, the fans and I love playing football at Alabama,” he said.

Waddle returned in a limited capacity in the title game after missing much of the season with an ankle injury that required surgery. But he had been one of the Tide's most dynamic players as a receiver and punt returner.

Waddle had 28 catches for 592 yards and four touchdowns in six games. He caught three passes for 34 yards against Ohio State, despite clearly not being 100%.

“It was a great experience,” Waddle said. “To be honest, when they told me I was going to have a chance to play, I already had it in my mind to play.

“It was great to get back out there with the team and just do it one more time and go out the right way. That was what it was all about.”

Saban said the players who are leaving school without degrees promised they would complete the remaining requirements.

“I'm really proud of each one of these guys," the coach said, “and they're always going to be part of the University of Alabama and the program here."