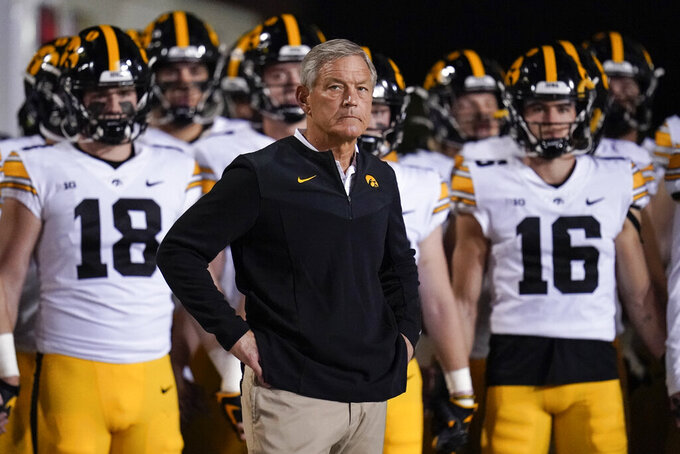 U.S. Magistrate Judge Helen Adams granted a motion Thursday to quash subpoenas that had asked the longtime Hawkeyes coach and his son to appear for depositions on Oct. 19 and Oct. 20. She said the depositions can be delayed until the football season is over in January, as the Ferentzes and lawyers for the university had requested.

The ruling came as No. 3 Iowa prepares to host No. 4 Penn State at Kinnick Stadium in a matchup of 5-0 teams on Saturday.

Lawyers for seven former players sought to take the depositions as they advance claims of racial discrimination against the university, Brian Ferentz and the team’s former strength and conditioning coach, Chris Doyle. The players' lawsuit is set to go to trial in March 2023.

The former players allege they were demeaned with racial slurs, forced to abandon Black hairstyles, fashion and culture to fit the “Iowa Way” promoted by Kirk Ferentz, held to different standards than white players and retaliated against for speaking out.

The university agreed to pay Doyle $1.1 million as part of a resignation agreement in June 2020, after dozens of former players said on social media that he had bullied and discriminated against them. Doyle has denied the allegations.

Kirk Ferentz argued in a court filing this week that having to appear in Des Moines or by Zoom for a deposition that could last for several hours on Oct. 20 would be “extremely burdensome,” noting that the bye week is filled with activities.

He said the absence of the head coach and offensive coordinator during practices would be “a tremendous disruption” as Iowa prepares to play at Wisconsin on Oct. 30. He said he would not have enough time to review records and discuss the case with lawyers before giving his testimony.

“I believe that I would lose, at a minimum, three days of attending to my duties of head coach, if I am required to prepare on one day, have my deposition taken on another, and attend the deposition of Brian Ferentz on a third day, which I understand I am entitled to attend as representative,” he wrote.

Brian Ferentz filed a similar declaration with the court.

Lawyers for the ex-players had offered to take Kirk Ferentz’s deposition by Zoom and to postpone Brian Ferentz’s as a compromise, but university lawyers rejected the offer.

The plaintiffs' lawyers argued that they have a right to pursue their claims expeditiously and that “there is simply no privilege that protects football coaches from being deposed during football season.”

“Football coaches are not the only litigants whose jobs require the expenditure of substantial time and energy, and their jobs are no more important than the doctors, CEOs, police chiefs, and directors of government agencies who are called to testify in civil actions on a daily basis,” they wrote.

Adams ruled that the subpoenas issued last month did not give the Ferentzes “reasonable time to prepare," noting their busy schedules and the wide-ranging claims made by the players. She said delaying the depositions for two or three months will harm no one.

A different federal judge earlier dismissed Kirk Ferentz as a defendant and narrowed the case's scope.