K-State back in poll at No. 25 as Oklahoma State trip looms 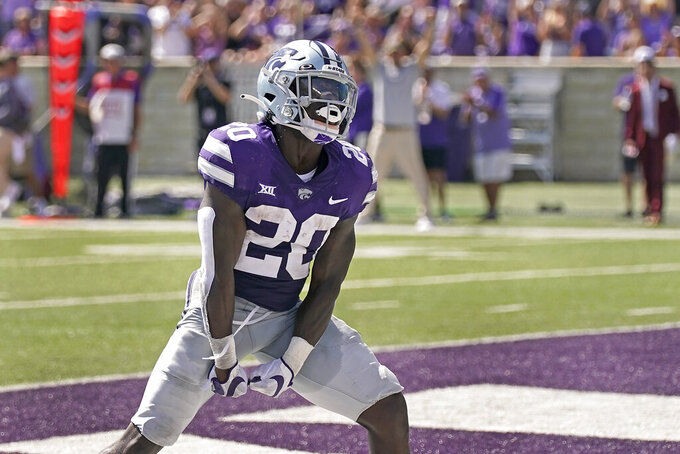 Kansas State running back Joe Ervin (20) celebrates after scoring a touchdown during the first half of an NCAA college football game against Nevada on Saturday, Sept. 18, 2021, in Manhattan, Kan. (AP Photo/Charlie Riedel) 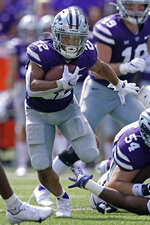 MANHATTAN, Kan. (AP) — The similarities for Kansas State coach Chris Klieman between the start of this season and his first season leading the Wildcats were so startling that he couldn't help but notice them.

There was the win over a lower-level school, Nichols State, two years ago and Southern Illinois this season. A win over a mid-major, Bowling Green, back then and Nevada last weekend. And a high-profile win over a Power Five opponent away from Manhattan — at Mississippi State in 2019 and against Stanford in suburban Dallas earlier this month.

Oh, and there's this: The first Big 12 test involves a trip to Oklahoma State.

“We didn't fare well,” Klieman said of the 26-13 loss in Stillwater. “Some of our older guys remember that.”

Still, the perpetually optimistic Klieman understands that every team in every season is different.

That bunch of Cowboys had do-everything wide receiver Tylan Wallace and running back Chuba Hubbard, who gouged what had been a decent Kansas State defensive front for 296 yards rushing in a virtuoso performance. And the Wildcats were just three games into Klieman's tenure, trying to adjust to the system he brought from North Dakota State.

Stanford has since romped past then-No. 14 Southern California and Vanderbilt, both of them on the road. Southern Illinois remains one of the top FCS teams in the country. Nevada's quarterback, Carson Strong, is a potential first-round pick.

No wonder Kansas State landed at No. 25 in this week's poll.

And if the Wildcats plan to make it a long stay, rather than the three-week stints each of the past two seasons, they have the perfect opportunity. Oklahoma State has squeaked through its first three games, and the Cowboys present a tough but winnable first road test, while the following week brings No. 4 Oklahoma to Bill Snyder Family Stadium.

“It's just fun to be part of starting conference play,” Klieman said. “We talk about conference play all offseason, and all preseason, about how difficult this league is week-in and week-out. So what you try to do leading up to conference play is try to prepare your guys and your team as best you can to handle some of the adversity coming your way.”

Not that the Wildcats haven't already faced some adversity.

The biggest blow came against the Salukis, when sixth-year senior Skylar Thompson hurt his right knee on a seemingly innocuous run play. Will Howard, who was pressed into duty as a freshman last season when Thompson got hurt, is back under center and preparing for a loud, demanding crowd in Boone Pickens Stadium.

Jaren Lewis also could get playing time as the Wildcats continue to toy with a two-QB look they unveiled last weekend.

“Honestly, Jaren is probably one of my best friends on the team. I was just so happy for him and him getting a shot out there,” Howard said. “He was rolling and so they kept him out there. Obviously, my time came in the second quarter and in the second half, and we both knew that at the end of the day, we were willing to do whatever it took to help this team.”

On the other side, the Kansas State defense will have to play the remainder of the season without Khalid Duke. Klieman said Tuesday the playmaking defensive end sustained a “lower leg” injury against Nevada.

“It sucks whenever you have a player down but you always have to have the mentality that you’ll finish the job and to finish it for Khalid,” Wildcats defensive tackle Timmy Horne said. "That’s what we were thinking about (Saturday) and to make sure we keep pushing and pressing through because you can’t bring the whole team down.”

That game against Nevada was on the pay-to-stream ESPN+ service. So was the previous week against Southern Illinois, and this coming week against Oklahoma State. And don't think the Wildcats haven't noticed.

Besides, the Wildcats are still unbeaten and back in the polls heading down to Stillwater.