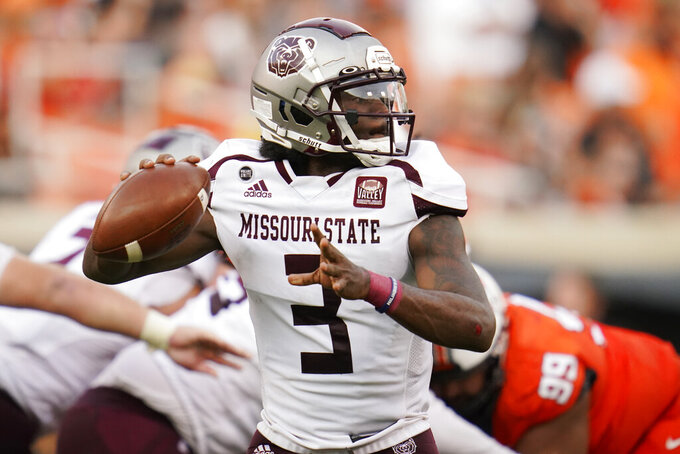 Oklahoma State stopped Missouri State on fourth down twice during the last two minutes of the fourth quarter to hold on for a 23-16 victory on Saturday.

The Cowboys botched a kickoff return deep in their own territory after the Bears scored their first touchdown with 3:06 remaining. Missouri State, trailing by seven, couldn’t score on the possession and had another chance to tie the game with less than a minute left but failed to complete the rally.

Oklahoma State’s Devin Harper, who finished with a team-high 2 1/2 tackles for loss, and Brock Martin recorded the final sack of Missouri State’s Jason Shelley that put the Bears away.

Oklahoma State backup quarterback Shane Illingworth threw for 315 yards and was 22-of-40 passing in his third career start.

Illingworth, who replaced regular starter Spencer Sanders in the team’s season opener, raced Oklahoma State down the field on its first offensive possession and connected in the end zone with Tay Martin.

Oklahoma State’s offense never looked the same, however, after its opening drive.

The Cowboys’ rushing attack struggled to build rhythm, recording just 1.9 yards per carry against their FCS visitor, while Illingworth’s accuracy declined from a 65.2% first-half completion percentage to 41.2% in the final two quarters.

“We need to regroup offensively with where we’re at, what we have and move forward,” Gundy said. “…So, looking forward to getting back to work. We need to rush the football better, we were not very good at rushing the football, and we got to get some young guys at the wideout spot ready to play.”

On a day where Big 12 powers Oklahoma and Iowa State won but struggled against heavy betting underdogs, the Cowboys went through a similar Week 1 challenge.

The Cowboys, who sit just one spot outside of the Associated Press Top 25, were without Sanders and starting defensive end Trace Ford, among others. Gundy expects Sanders to rejoin the within a couple of days, but Ford is expected to miss more time.

Oklahoma State will also miss safety Tre Sterling for the first half of its game against Tulsa after he picked up a fourth-quarter targeting penalty on Saturday.

‘FUEL TO THE FIRE’

Growing up in Houma, Louisiana, Martin is accustomed to preparing for hurricanes.

Hurricane Ida displaced his family, who were able to safely evacuate to Houston but their family home didn’t hold up in the damage, losing its roof.

Martin channeled the difficult time his family has went through into a team-high 107 receiving yards on six catches against Missouri State.

“It added more fuel to the fire,” Martin said. “I just used it to motivate me as much as I can.”

Martin was greeted to messages of support from his family following the Cowboys’ win.

“I was grateful for that,” he said. “It made me feel good that they’re safe.”

Oklahoma State: The Cowboys appeared on their way to a rout before sputtering too often on offense and allowing the Bears to stay competitive late into the second half.

Missouri State: The Bears’ defense kept the Oklahoma State offense in check for nearly all of the last three quarters but the offense couldn’t cash in on the chances it was afforded.