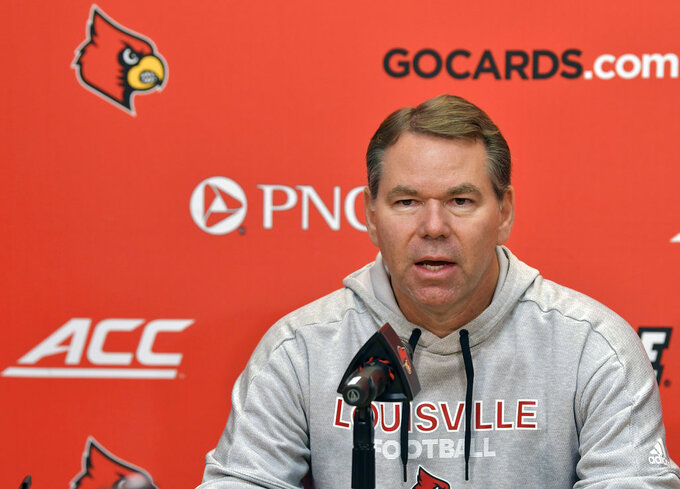 University of Louisville athletic director Vince Tyra speaks to the media during a news conference in Louisville, Ky., Sunday, Nov. 11, 2018. Tyra announced the termination of head football coach Bobby Petrino, along with three of his assistants. (AP Photo/Timothy D. Easley)

LOUISVILLE, Ky. (AP) — Louisville's seven-game skid was bad enough. Worse were the large margins of defeat and opponents' apparent ease in lighting up the scoreboard.

That combination spelled the end of coach Bobby Petrino's second chapter with the Cardinals.

Louisville fired Petrino on Sunday morning with two games left in a spiraling season that includes five blowout losses in which the Cardinals allowed at least 50 points.

The school announced Petrino's dismissal with a statement from athletic director Vince Tyra, who wasn't confident the coach could turn things around next season. He said a new head coach would be chosen soon to restore the program to national prominence.

The AD said at a news conference later that he considered a number of factors in Petrino's status, but noted that the three games since Louisville's bye showed no progress.

"It was clear the players weren't responding," he said. "The coaches' and the players' efforts have to go in the right direction, but I didn't feel it was going that way."

Purdue head coach Jeff Brohm, a former Louisville quarterback who later became an assistant under Petrino, has frequently been mentioned as the top candidate to replace him. Tyra said he had "a list in mind" but didn't want to interfere with potential candidates with the season still in progress.

Petrino, 57, departs with a 77-35 mark in two stints with Louisville, including 36-26 since returning in 2014. His exit will be expensive for Louisville, which owes him $14 million under terms of his contract extension signed in April 2016. Tyra said Petrino would receive the full buyout.

The school was left with little choice but to release Petrino with Louisville struggling and sections of empty seats at Cardinal Stadium recently after opening a new north end section in a $63 million renovation project.

Louisville's stunning freefall comes a season after 2016 Heisman Trophy winner Lamar Jackson capped one of the program's most remarkable periods under the offense-minded Petrino. Besides becoming the school's first Heisman winner, Jackson had the program as high as No. 3 in The Associated Press Top 25 and within reach of the College Football Playoff at No. 5 that November.

But other than sharing the 2016 Atlantic Division title with Clemson, Louisville wasn't a consistent ACC contender after leaving the Big East.

This season, the Cardinals have failed to beat a Power Five school and needed second-half rallies to beat FCS Indiana State and Western Kentucky.

An offensive falloff was expected following the departure of the dynamic Jackson, who broke numerous school and conference records before being selected by the Baltimore Ravens in the first round of last spring's NFL Draft.

However, Jackson's exit ended up revealing a host of deficiencies as Louisville struggled to score. The Cardinals rank at or near the bottom of several ACC offensive categories and Petrino has shuffled quarterbacks Jawon Pass and Malik Cunningham.

Their defensive weaknesses have been more glaring and left them looking up at the rest of the ACC statistically. The Cardinals have been outscored 291-125 in that span, including a 77-16 thumping at No. 2 Clemson on Nov. 3.

Petrino remained hopeful of improvement, but another lopsided loss ended with him being shown the door.

The Montana native is 119-56 overall in a college career that included stops at Arkansas and WKU. He also coached 13 games with the NFL's Atlanta Falcons in 2007. His career has included a lot of wins and some controversy and hard feelings left behind.

He was 31-9 with Louisville from 2003-06, taking the Cardinals to the Orange Bowl, while also constantly coming up as a candidate for other jobs. He left college for the Falcons and lasted less than a season before taking the Arkansas job.

That ended with embarrassment. He was fired after getting into a motorcycle accident, which exposed an extra-marital affair with an athletic department employee and Petrino's lies to his boss.

Petrino resurfaced at WKU for the 2103 season before Louisville gave him another chance. Then-athletic director Tom Jurich re-hired Petrino as the program transitioned from the Big East to the ACC.

But Jurich is gone as part of the fallout from a series of scandals involving the men's basketball program that also felled Hall of Fame coach Rick Pitino.

Petrino is now out as well, leaving Tyra to make his second major coaching hire after basketball coach Chris Mack in March. In the meantime, Ward must close the season on a high note that proved elusive for Petrino and the Cardinals.

"Talent-wise, we've got enough to win with," Tyra said. "There's a lot to build on in terms of skill and I'm excited about that part of it. But we've got to draw it out of them and teach them what it's like to play their (butt) off in a Cardinal uniform."