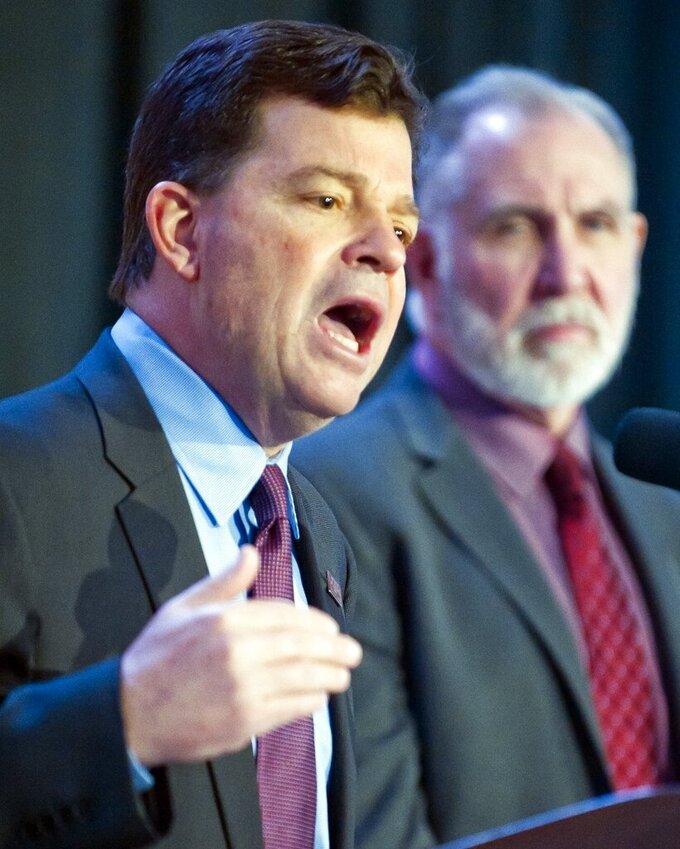 FILE - In this Jan. 11, 2016, file photo, new Texas A&M Athletic Director Scott Woodward responds to questions from the media after being introduced by Texas A&M University president Michael Young, right, in College Station, Texas. LSU has formalized an agreement to bring in Scott Woodward as the university’s next athletic director. Woodward, whose hiring was announced Thursday morning, April 18, 2019, has been Texas A&M’s athletic director since 2016 and held the same post at Washington for eight years before that. (Dave McDermand/The College Station Eagle via AP, File)

BATON ROUGE, La. (AP) — LSU has formalized an agreement to bring in Scott Woodward as the university's next athletic director.

Woodward, whose hiring was announced Thursday morning, has been Texas A&M's athletic director since 2016 and held the same post at Washington for eight years before that.

The Baton Rouge native and 1985 LSU graduate takes over at his alma mater on the heels of the university's announcement a day earlier that 11th-year athletic director Joe Alleva would be stepping down and be reassigned to another job within the institution as special assistant to the university president.

"Returning home to the LSU family to lead the department of athletics is incredibly humbling and exciting," Woodward said in a statement released by the university. "The state university has been a part of my life for more than five decades, and I know — and I embrace — the high expectations of Tiger Nation."

Woodward's stint in College Station was marked by a pair of high-profile coaching hires for the Aggies within the past 18 months.

Woodward's homecoming coincides with a period of uncertainty for LSU's men's basketball program. Coach Will Wade was reinstated from suspension by Alleva on Sunday, days after denying he broke NCAA rules when making a recruiting offer that he discussed in a leaked FBI wiretap transcript.

Before working as a university administrator, Woodward co-owned a public relations firm in Baton Rouge and consulted for clients in the education, insurance and oil industries.

He also has worked with the Louisiana Nature Conservancy and the New Orleans Center for Creative Arts, and also sat on the board of directors of the Baton Rouge Food Bank.