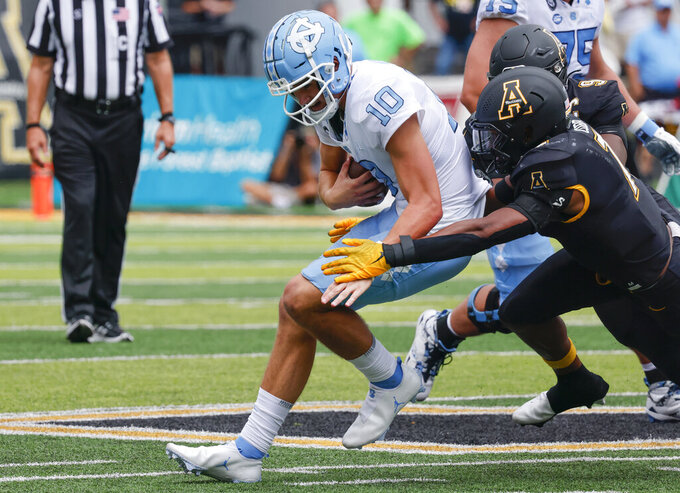 North Carolina's redshirt freshman quarterback continued his torrid start to the season, throwing for 352 yards and combining for five touchdowns as the Tar Heels outlasted Appalachian State 63-61 on Saturday — despite surrendering 40 points to the Mountaineers in a wild fourth quarter.

Maye, the younger brother of former Tar Heels basketball star Luke Maye, has thrown a school-record nine touchdown passes in two career starts. He also ran for a score against the Mountaineers.

“He's a special young guy,” Tar Heels coach Mack Brown said. “He's a great young quarterback who is only going to get better.”

Sixth-year quarterback Chase Brice threw for 376 yards and a school-record six touchdowns — four of those in the fourth quarter — for Appalachian State (0-1).

The Tar Heels (2-0) won despite squandering a 20-point fourth-quarter lead and allowing the Mountaineers to gain 664 yards and score nine touchdowns on offense.

But that didn't dampen Brown's enthusiasm.

“You take a win and go,” Brown said. "We we were underdogs and hadn't won a road game all of last year, so anybody who thinks I'm going to be mad or disappointed over this one doesn't understand coaching. I'm excited to win against a really good team on the road."

Appalachian State coach Shawn Clark said he was thrilled with the fight his team showed in the fourth quarter.

“We were down 20, and our guys never quit,” Clark said. “We’re going to have a helluva football team. Our guys are hurt, and we’re disappointed, but not discouraged. The future is bright at Appalachian State.”

The two teams combined for 62 points and 504 yards — in the fourth quarter alone.

North Carolina seemed in control, leading 41-21 after the third quarter, but the Mountaineers climbed back in the game behind Brice, who led six TD drives in the final quarter.

Maye showed poise beyond his years in his first road start.

With the tied at 49, he beat an all-out blitz by lofting a pass over the middle to D.J. Jones for a 42-yard touchdown pass to give North Carolina the lead with 2:50 left in the game.

“They were bringing the house a couple times trying to hit up a young quarterback,” Maye said. “But they forgot about D.J., who slipped out in the seam. He was wide open and I got power driven into the ground. I tried to float him up one and he took care of the rest.”

But the game was far from over.

Brice responded with is fifth TD pass of the game, a 28-yard strike to Deshaun Davis with 31 seconds left. The Mountaineers went for the 2-point conversion — and the win — but Brice's pass sailed just over a backpedaling Davis' head.

“I had made my mind up early that we were going for two and the win,” Clark said. “We’re not going for second place at Appalachian State.”

But when UNC's Bryson Nesbit returned the ensuing onside kick for a 43-yard touchdown — rather than simply getting down — it gave the Mountaineers yet another chance to tie the game trailing 63-55.

“Our coaches were yelling, ‘no, get down,’” Brown said.

Sure enough, Brice found Kaedin Robinson for a 26-yard TD strike with 9 seconds left to cut the lead to 63-61.

The Mountaineers went for 2 but Brice was stopped short of the end zone.

The Tar Heels fell behind 21-7 before rattling off 34 straight points and silence a record crowd of 40,168 at Kidd Brewer Stadium. Maye threw three TD passes in the first half, including a 10-yard TD strike to Nesbit to give the Tar Heels a 28-21 lead with 1 second left.

Maye made it 28 straight unanswered points for UNC with a 12-yard touchdown run to start the second half, receiving congrats from former Tar Heels and current Washington Commanders quarterback Sam Howell in the end zone after tiptoeing the sideline.

It was the most points ever scored in a UNC game since the school started football in 1888.

The Tar Heels played without standout wide receiver Josh Downs, who sat out with a lower body injury.

Downs, arguably the team's best player, had nine catches for 78 yards and two touchdowns in UNC’s win over Florida A&M and led the ACC with 101 catches last season for 1,335 yards and eight TDs.

Brown said it's unclear how long Downs will be out.

North Carolina: New defensive coordinator Gene Chizik has plenty of work to do. His defense gave up 338 yards and 40 points in the fourth quarter. “We will be all over them and they have to get more discipline," Brown said of the defense. “We have to cover better and get more pressure on the quarterback. We can't have facemask penalties and late hits. But it's easier to coach them when you win.”

Appalachian State: Brice had a spectacular game and Nate Noel ran for 116 yards and two TDs, but the offense stalled during the third quarter, shooting itself in the foot. The defense had a chance to seize momentum several times, but struggled to stop Maye and the Tar Heels.

Appalachian State: at No. 6 Texas A&M on Saturday.