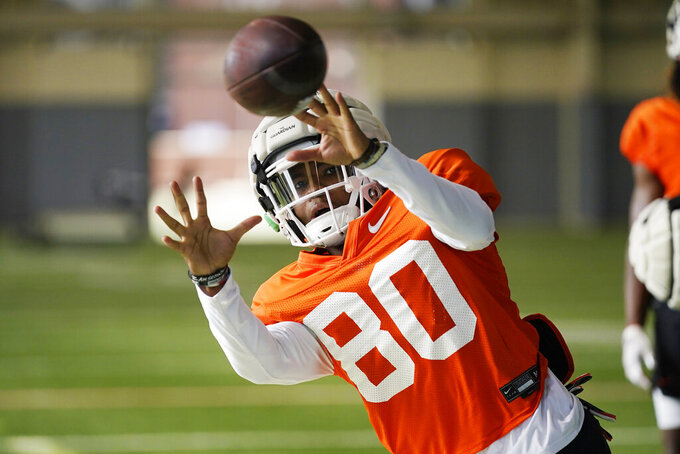 Gundy has a 149-69 record and, with a victory, would become the seventh active coach and 65th in major college coaching history to reach the milestone.

Gundy is proud of what he's done at his alma mater, and it's been especially good lately. The Cowboys played for the Big 12 title last season and beat Notre Dame in the Fiesta Bowl.

He said he has much more to accomplish, so a win wouldn't register as more important than another to him.

“We’ve been very fortunate here to have a lot of success, and – knock-on wood – I feel better now than I have in years and years here,” the 55-year-old Gundy said. “I’m thinking way down the line. I mean, I thought at one time at 65 I’d check in, but I don’t see that happening now.”

For now, Gundy just wants his 12th-ranked Cowboys to get off to the right start, and they will have to earn it. Central Michigan is coming off a 9-4 season that finished with five straight wins, including a victory over Washington State in the Sun Bowl. Lew Nichols III, who led the nation with 1,848 yards rushing last season, returns. So does quarterback Daniel Richardson, who passed for 2,633 yards and 24 touchdowns a year ago.

“Oklahoma State is a very good team,” Central Michigan center Jamezz Kimbrough said. “They have some good players. But it’s always about us and what we do. We just control the stuff that we control. We’re very confident going into Thursday.”

Oklahoma State has some offensive weapons, too. Senior quarterback Spencer Sanders leads an offense that returns 10 starters. He passed for 371 yards and four touchdowns and ran for 125 yards in the Fiesta Bowl win.

“Obviously, their quarterback’s unbelievable," Central Michigan coach Jim McElwain said. "He makes great decisions. He makes the thing go for them. You wish in an opener you were playing a team that maybe was trying to break a guy in. Well, this guy’s looking to break us in.”

Central Michigan stunned Oklahoma State 30-27 in 2016. It was controversial because Oklahoma State was erroneously called for intentional grounding on fourth down, giving the Chippewas an untimed down. Cooper Rush connected on a deep Hail Mary, and a lateral and run later, Central Michigan was celebrating a huge win.

“We haven’t talked too much about it,” Kimbrough said. “Of course, it’s out there. The media talks about it. It’s not something that you could just act like you don’t see. But we don’t focus on that stuff."

The Cowboys led the nation in sacks per game last year, and much of that production is back. Collin Oliver led the Big 12 with 11.5 sacks as a true freshman last season and Brock Martin had nine sacks. Tyler Lacy had 11.5 tackles for loss.

Trace Ford, a dominant pass rusher who missed last season with an injury, has returned.

Nichols rushed for at least 100 yards his final eight games last season and carried at least 25 times in seven of those games. All but one of those games was a win for the Chippewas, and the loss was by a single point.

“Their back is physical,” Gundy said. “He’s part of what they are.”

Central Michigan's Dallas Dixon is primed to be Richardson’s primary receiver. He had 701 yards and eight touchdowns last season.

Brennan Presley is poised to have a breakout year for Oklahoma State. He had 50 catches for 619 yards and five touchdowns last season, including 10 catches for 137 yards against Notre Dame.

OUT FOR THE YEAR

McElwain said Central Michigan offensive lineman Keegan Smith has re-injured a knee he hurt last season and is out for the year. The 6-foot-3, 300-pound sophomore started four games up front last season. McElwain said the injury will require surgery, but he expects Smith to recover.