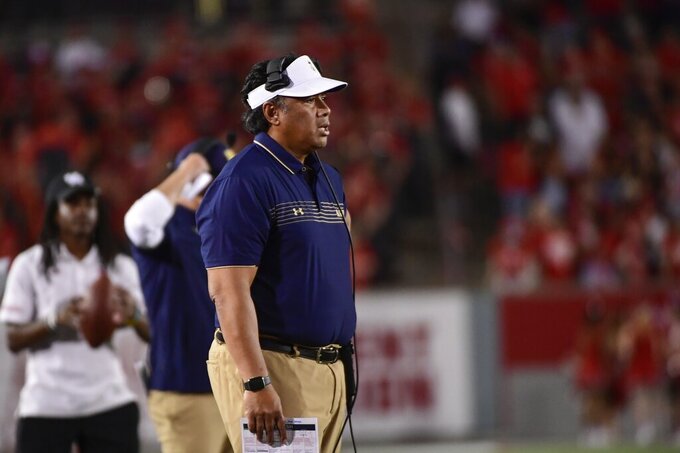 Navy head coach Ken Niumatalolo stands on the sideline during the second half of an NCAA college football game against Houston, Saturday, Sept. 25, 2021, in Houston. (AP Photo/Justin Rex)

Navy's football program was going through a bit of a crisis less than a month ago. The offensive coordinator was fired, and then he wasn't. Either way, the team's problems looked like they'd take a while to fix.

Two games later, the Midshipmen have rebounded so impressively that coach Ken Niumatalolo had to rein in expectations a bit.

“We won one game," he said. "We’re not the Tampa Bay Buccaneers or the Tide or anything.”

That's true, but after scoring 10 points through its first two games, Navy suddenly looks like a threat to some of the better teams in the American Athletic Conference. The Midshipmen proved that last weekend when they beat Central Florida 34-30, and this Saturday they host No. 24 SMU.

The Mustangs (5-0, 1-0 AAC) are off to a fine start. In fact, this is the third straight year they've won at least their first five games. A few weeks ago, this matchup with Navy probably looked like an easy victory, but that might not be the case anymore.

“Typical Navy team,” SMU coach Sonny Dykes said. “Was really impressed with what they did last week against Central Florida, just the way that they battled and the comeback they had. They made plays on all three sides of the ball.”

It's been quite a turnaround for Navy (1-3, 1-1) after its 23-3 loss on Sept. 11 to Air Force. According to Niumatalolo, after that game the school's athletic director decided to fire longtime offensive coordinator Ivin Jasper, but cooler heads eventually prevailed and Jasper remained with the staff in his other role as quarterbacks coach.

Navy had a week off after that, then the Midshipmen took a lead into the fourth quarter at Houston before losing 28-20. They followed that up with the victory over UCF.

The trek from Dallas to Annapolis, Maryland is a lengthy one for SMU, but that's just part of being in the AAC. The league has schools in Texas and Florida as well as Pennsylvania and Maryland.

“I don’t think it’s that big of a deal, but we’re going to treat it like it is and make sure that we do everything we can do to squeeze every little advantage we can out of how we travel and what we do,” Dykes said. “The big thing is once you get somewhere, you’ve got to go play football. It’s a 100-yard field and guys have got to go play and do their job and play hard.”

One big sign that Navy is making progress: The Midshipmen managed only 36 yards rushing against Air Force, then had 202 against Houston and 348 against UCF.

The big test for any Navy opponent is defending the option.

“It’s so different than what everybody does,” Dykes said. “It’s very difficult to prepare for, it’s just a completely different way of playing football and you know, you have to think differently when you play these guys because it’s going to be a different type of game, and you have to have a different approach.”

This game pits the AAC's top rushing offense against its No. 1 passing offense. SMU's Tanner Mordecai leads the league with 314 yards passing per game.

The Mustangs also have two of the conference's top five rushers in Ulysses Bentley IV (101 ypg) and Tre Siggers (69 ypg).

Navy and SMU play for the Gansz Trophy, which was created by the two athletic departments in 2009. The trophy honors the late Frank Gansz, a longtime special teams coach in the NFL who also spent time at Navy and SMU.