NCAA's Emmert: It is time to decentralize college sports 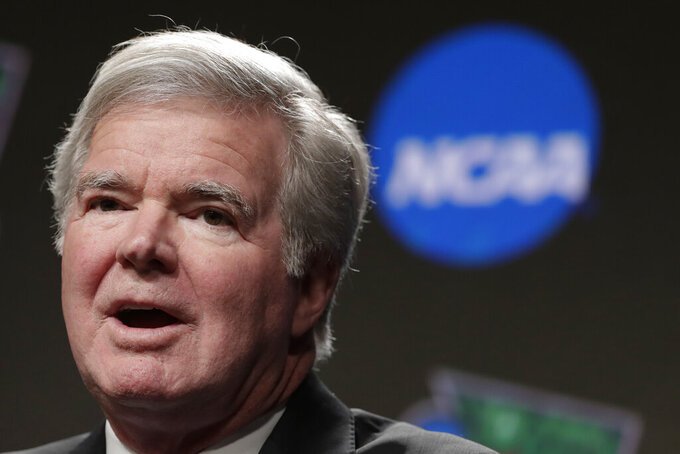 FILE - In this April 4, 2019, file photo, NCAA President Mark Emmert answers questions during a news conference at the Final Four college basketball tournament in Minneapolis. The NCAA Board of Directors is expected to greenlight one of the biggest changes in the history of college athletics when it clears the way for athletes to start earning money based on their fame and celebrity without fear of endangering their eligibility or putting their school in jeopardy of violating amateurism rules that have stood for decades.(AP Photo/Matt York, File)

NCAA President Mark Emmert said Thursday the time is right to consider a decentralized and deregulated version of college sports, shifting power to conferences and campuses and reconsidering how schools are aligned.

Emmert said the recent Supreme Court ruling against the NCAA along with the lifting of restrictions on athletes monetizing their fame should be a catalyst to “rethink” what college sports is about.

In a 30-minute interview with a small group of reporters, Emmert stressed he was not putting forth a mandate or even a recommendation. But he laid out a vision for the future of college sports that puts fewer limitations on athletes and de-emphasizes the role of a national governing body like the NCAA, which was founded 115 years ago and oversees more than 450,000 students who play sports.

“When you have an environment like that it just forces us to think more about what constraints should be put in place ever on college athletes. And it should be the bare minimum,” Emmert said.

Emmert said the NCAA's more than 1,100 member schools should consider a less homogenous approach to the way sports are governed and re-examine the current three division structure, which includes 355 Division I colleges.

The NCAA's rules and regulations have long been criticized and court challenges have been mounting in recent years.

“We need to be ready to say, ‘Yeah, you know, for field hockey, field hockey is different than football. Wrestling is different than lacrosse,’ and not get so hung up on having everything be the same,” said Emmert, who was president of LSU and the University of Washington before taking the NCAA job in 2010.

Sports serve different functions at different schools, Emmert said, and the NCAA needs to govern in a way that is more reflective of that. He added the NCAA should not shy away from the fact that a small percentage of athletes are using college sports as a path to professional sports.

“We need to embrace that,” he said. "And with NIL out there, we’re providing other opportunities around this whole notion of using college sports as a career launching pad.”

As of July 1, the NCAA waived its longstanding rules prohibiting athletes from earning money off their fame for things such as online endorsements, sponsorship deals and personnel appearances. The move allowed athletes in states that did not have so-called name, image and likeness laws — designed to usurp the NCAA's previous restrictions —- to capitalize similarly to those in states with NIL laws, such as Florida and Georgia.

In states were there are no laws to set NIL guidelines, schools have been instructed to craft their own — a dramatic change for the NCAA. College athletes have jumped into the new market with deals big and small.

The Supreme Court ruling against the NCAA last month was also seen as a bombshell, a 9-0 decision upholding a lower court ruling in an antitrust case related to caps on compensation. Legal experts and college sports observers immediately wondered if the NCAA will look at other approaches as a result.

The types of reforms to college sports governance and structure that Emmert is now advancing are not new. The Knight Commission on Intercollegiate Athletics, for one, has been promoting a plan to revamp Division I and pull major college football out of the NCAA’s purview altogether.

Emmert has spoken out against that specific idea, but his comments suggest change is certainly on the table.

“I think this is a really, really propitious moment to sit back and look at a lot of the core assumptions and say, ‘You know, if we were going to build college sports again, and in 2020 instead of 1920, what would that look like?’" Emmert said. "What would we change? What would we expect or want to be different in the way we manage it. And this is good. This is the right time.”

The NCAA's hands-off approach to NIL reform came after months of work was done on a proposal that created standardized rules across each division and the organization was also hoping for help from Congress in the form of a federal NIL law.

After the Supreme Court ruling threw open the door for more legal challenges to the NCAA's rules, the association pivoted to a hyperlocal approach. The current model creates a patchwork of standards around the country, something college sports leaders insisted would be untenable.

Big 12 Commissioner Bob Bowlsby earlier this week told ESPN the NCAA's NIL solution “was intended to prevent us from getting sued.”

Emmert conceded the high court's ruling in the Alston case was a clarifying moment and should motivate college sports leaders to act on reforms.

“You can lean back and do nothing and then just wait and see what happens,” Emmert said. “Or you can say, ‘Look, we’re in it. This is a new era.’ We need to take advantage of it, pivot as much as we can toward the areas that I was just talking about and and embrace that change rather than fighting it.”