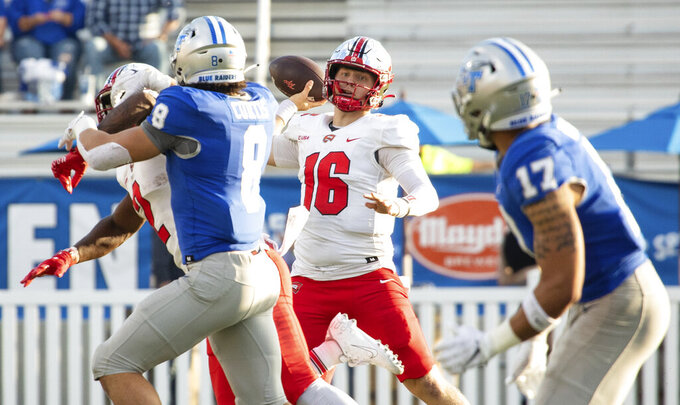 Conference USA's new media rights deal with ESPN and CBS steals a page from the Mid-American Conference's playbook, with the new-look league agreeing to play midweek football games throughout October to try to increase visibility and build its brand.

“We obviously had an example to look at and ratings from how the MAC has done,” C-USA Commissioner Judy MacLeod told The Associated Press on Thursday. “Really, this is a membership decision. And if they’re not going to buy in and commit to it, then we would not have done it. I can’t give enough credit to the football coaches, who understood the importance of exposure."

Six current C-USA members are leaving after this season to join the American Athletic Conference. Liberty, Jacksonville State, New Mexico State and Sam Houston State are joining C-USA next year and Kennesaw State is scheduled to join in 2024.

“It’s almost like a brand-new entity,” MacLeod said. “And that did absolutely play into the exposure piece. Plus, sometimes our programs are better than maybe the perception is out there because not enough people are seeing them.”

The new agreement guarantees C-USA football games will be on ESPN cable networks, something the soon-to-be expiring contracts did not. C-USA's last deal often sent fans scrambling to figure out where to watch their teams — including Facebook streams and the NFL Network.

“We listened to our fans, quite honestly,” MacLeod said.

All October conference games will be played midweek. ESPN networks will carry eight of those games a year.

The MAC began using a midweek-heavy football schedule about 10 years ago and now plays all of its games before Saturday throughout November. MACtion has become a popular brand, though playing Tuesday and Wednesday nights is not always easy for players and coaches and fans who want to attend the games.

“All of those concerns are legitimate,” MacLeod said. “It’s a little bit of a disruption to campus to have a midweek football game. So it was a lengthy process. But the group was together and ready to go.”