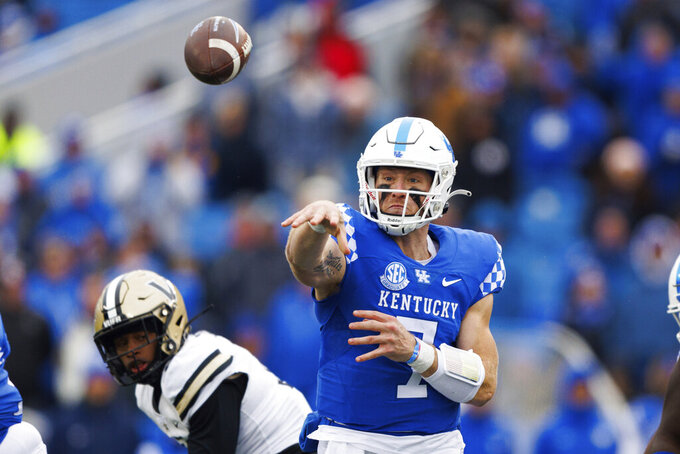 Kentucky quarterback Will Levis throws a pass during the second half of an NCAA college football game against Vanderbilt in Lexington, Ky., Saturday, Nov. 12, 2022. (AP Photo/Michael Clubb)

Georgia has already clinched a spot in the SEC Championship as Eastern Division champion and looks to finish 8-0 in league play for the second consecutive season. Struggling Kentucky needs a major lift after dropping its fourth in six games, a 24-21 home defeat to Vanderbilt that allowed the Commodores to halt a 26-game SEC winless streak.

Georgia QB Stetson Bennett vs. Kentucky's secondary. Bennett ranks second in SEC passing (289.5 yards per game) with 14 touchdowns, including three scores in last week's 45-19 victory at Mississippi State. Bennett will face a Wildcats defense ranked third in the SEC (317.0 yards) but seeking to recover big after yielding 448 yards to Vanderbilt and allowing the Commodores to drive for the game-winning touchdown in the final minute.

Georgia: WR Ladd McConkey leads the Bulldogs with 43 receptions, tied for ninth in the SEC, and is second on the team with 578 yards. He has four touchdowns, including two last week against Mississippi State. One was a career-best 70-yard run, the other a 17-yard catch.

Kentucky: RB Chris Rodriguez Jr. hasn’t missed a beat since returning from a four-game suspension to start the season. The senior ranks seventh among SEC rushers with 733 yards on 134 carries and is 10th with six touchdowns. That includes 162 yards rushing with two TDs in the loss to Vanderbilt, highlighted by a 72-yard scoring run. Rodriguez needs 362 yards to match Sonny Collins (3,835) for second all-time in school history.

Georgia has won the last 12 in the series. ... Kentucky's last win against a top-ranked team was the 2007 triple-overtime victory against eventual national championship LSU. ... The Bulldogs enter the game ranked no lower than third in most of the SEC's major statistical categories, including first in total defense (269.8 yards per game). ... Malaki Starks and Christopher each have two interceptions for the Bulldogs and rank first and fourth, respectively, with 48 and 37 tackles. ... Wildcats QB Will Levis passed for just 109 yards without a TD against Vandy, his second scoreless effort in the past three games. ... Kentucky is tied for 126th of 131 FBS teams with 39 sacks allowed. ... The Wildcats are bowl-eligible for a school-record sixth consecutive season.