No. 11 Baylor heads to K-State trying to end road woes 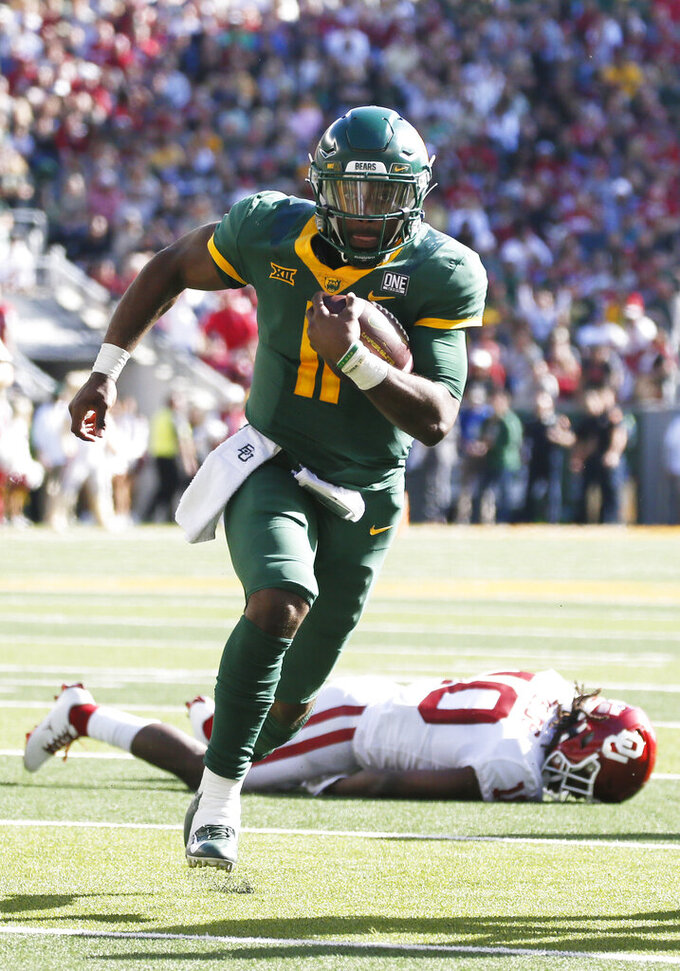 Baylor quarterback Gerry Bohanon (11) scores on a 14-yard touchdown as he runs past Oklahoma safety Pat Fields (10) during the second half of an NCAA college football game in Waco, Texas, Saturday, Nov. 13, 2021. (AP Photo/Ray Carlin)

MANHATTAN, Kan. (AP) — Nobody can dispute the fact that No. 11 Baylor is exceedingly tough to beat at home, not the least of which is Oklahoma, which just had its national championship hopes dashed with a loss in Waco last weekend.

The Bears on the road? That's another story.

Their losses to ninth-ranked Oklahoma State and TCU came away from home. Their season-opener was a 29-20 victory at lower-level Texas Southern that came down to the fourth quarter. And they were hardly dynamic in a 45-7 win at Kansas, a school that just about everyone in the Big 12 besides Texas has handled rather easily.

There is certainly a lot riding on the Bears figuring out their road woes. They are one game behind the Sooners and Cowboys in the Big 12 standings with the tiebreaker over Oklahoma, so their championship hopes are very much alive.

“They're very good. I think they have players across the board,” Kansas State quarterback Skylar Thompson said. “We're excited because it's a great opportunity. It's a really good football team, and we believe that we're a really good team.”

After beginning Big 12 play with a three-game swoon, they have ripped off four consecutive wins with the last three — over Kansas, TCU and West Virginia — in lopsided fashion. Their defense is allowing 13 points a game over that stretch while their offense, led by Thompson and do-everything back Deuce Vaughn, has topped 31 points in each game.

“I marvel at what we’ve done the last four weeks,” Kansas State coach Chris Klieman Said. "If you’re not ready to play, you’re going to get beat, and our kids have come the last four weeks with an unbelievable mindset and great preparation and confidence to say, ‘We’re going to play our friggin’ best today.’ Have we played our best? I don’t know. We’re getting there though, and it’s fun to watch because when you’re playing with confidence, you’re tough to beat.”

Despite the Bears’ road woes this season, they have had plenty of success in Manhattan. They’ve won three of the past four games at Bill Snyder Family Stadium after losing in their first four trips there.

“It’s a fun stadium,” Pitre said. “I don’t know how that works, but it does get really loud at K-State. They do pack the house. Their fans do a great job supporting their team.”

The Wildcats lost defensive back Cincere Mason, a transfer from Kennesaw State, for the rest of the season because of a knee injury sustained against the Mountaineers. Defensive end Spencer Trussell (ankle) will be a game-time decision.

Kansas State defensive end Felix Anudike-Uzomah has forced four fumbles over the past three games, including one last week against West Virginia. The sophomore from suburban Kansas City also has five sacks over the same span to reach 11 for the season.

“Maybe he was a guy who was underrated or something last year,” Baylor offensive lineman Grant Miller said. “He's obviously a great athlete, he has great length. And that's something you have to be aware of, especially when you're talking about pass rushers.”

Baylor running back Abram Smith is riding a string of four consecutive 100-yard rushing games after going for 148 in last week’s win over Oklahoma. He leads the Big 12 with 1,203 yards rushing to go with 11 touchdown runs.

“He's willing to run into a wall,” Baylor coach Dave Aranda said. “There's other guys that it has to be clean — ‘Where’s the gap? That's the gap, is it going to get any bigger?' With Abram, man, he can hit those walls. And on the other end of it, he's delivering punishment and giving energy on our sideline."

The Wildcats will honor 31 seniors on Saturday, including five sixth-year seniors that took advantage of an extra year provided by COVID-19 relief. Among them is quarterback Skylar Thompson, who has thrown for 1,456 yards with nine touchdowns and two interceptions over the past six games.

This story has been corrected to show that Smith leads the Big 12 in rushing.