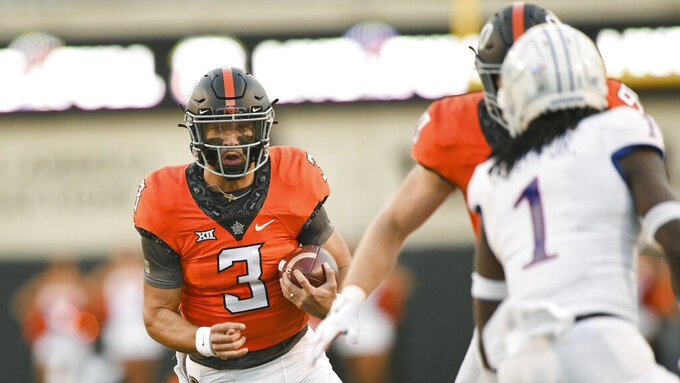 MORGANTOWN, W.Va. (AP) — West Virginia's second half of the schedule is chock full of opposing running backs who have diced their way through defenses.

Mountaineers coach Neal Brown is especially concerned about the next one: No. 11 Oklahoma State's Jaylen Warren.

The 215-pound Warren averages 22 carries for the run-oriented Cowboys and is fourth in the Big 12 with 850 yards. It’s the way he moves that has Brown’s attention.

“Jaylen Warren runs as physical as anyone in our league,” Brown said. “He runs the ball angry. He is a violent runner. He runs downhill. He breaks tackles. It’s impressive.”

Warren has put together four 100-yard games this season, including a 218-yard effort at Boise State as well as 123 rushing yards and 81 receiving yards against Kansas State.

The Utah State transfer could figure prominently on Saturday in a game that Oklahoma State (7-1, 4-1, No. 11 CFP) needs to win on the road to continue a trajectory toward its first berth in the Big 12 championship game.

A 55-3 pounding of Kansas last week was a departure from Oklahoma State's typical margin of victory this season. The Cowboys' previous scoring high was 32 points and their average margin in their six other wins was seven points.

Coach Mike Gundy has noticed an improvement in the offense of West Virginia (4-4, 2-3), which struggled to score earlier in the season and has two straight victories, including a 38-31 win over Iowa State last week.

Oklahoma State has won six straight over the Mountaineers, who are trying to beat ranked opponents in consecutive weeks.

"We need to put ourselves in a position where we’re in a competitive game in the fourth quarter,” Gundy said.

ROAD TO THE TITLE GAME

Oklahoma State is tied with Baylor for second place behind No. 4 Oklahoma and currently holds the tiebreaker to advance to the championship game because it beat the Bears last month. The Cowboys play the Sooners in the Bedlam game on Nov. 27.

West Virginia will face Oklahoma State quarterback Spencer Sanders for the first time after he missed their meetings in each of his first two seasons due to injury.

Oklahoma State's defense, led by Big 12 leading tackler Malcolm Rodriguez, has not allowed more than 24 points in a game. The starting lineup consists of all juniors and seniors, which Rodriguez said could be a key to sustaining success late in the season:

“It just goes back to being veterans," he said. "We’ve been here a long time, it feels like. It’s just one of those things where we’ve been here before and we know what it takes.”

Improved play on the offensive line has allowed West Virginia quarterback Jarret Doege to thrive in recent weeks. The offense struggled a month ago during a three-game losing streak. Last Saturday Doege threw for a season-high 370 yards against Iowa State.

“I put in so much work in the offseason and it's finally, I guess, just clicking,” Doege said. “I stand back there really comfortable, confident. With the way they're playing, I've got plenty of time to get the ball off.”

West Virginia hopes to feed off a ceremony at the game in which it will retire the No. 9 worn by College Football Hall of Fame quarterback Major Harris.

Neal Brown said he planned to show his players video highlights of the dual-threat Harris, who led the Mountaineers to an 11-0 regular season in 1988. He was a Heisman Trophy finalist in 1989.

“If you're not a native, that was my introduction to West Virginia football,” Brown said. “At the time, he was so unique.”