No. 11 Penn State beats Rutgers for the 16th straight time 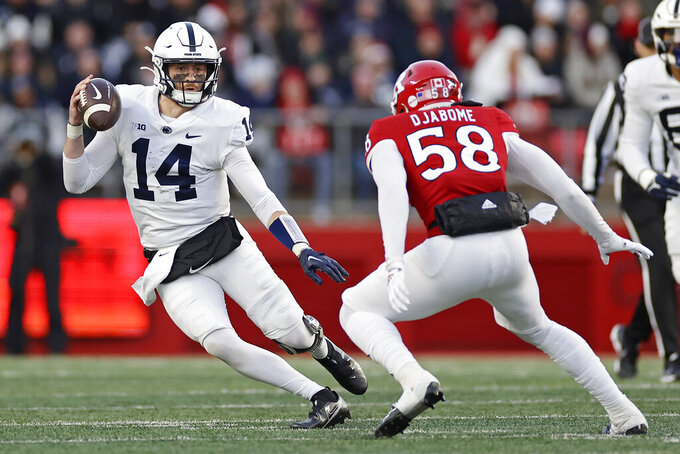 PISCATAWAY, N.J. (AP) — James Franklin picked up his 100th career coaching victory by seeing No. 11 Penn State make big plays in every phase of the game.

Sean Clifford ran for a touchdown and threw for another and the Nittany Lions scored twice on fumble returns and once on a kickoff return in beating Rutgers 55-10 Saturday.

Freshman Nick Singleton scored on a 100-yard kickoff return, Kobe King gave Penn State (9-2, 6-2 Big Ten) the lead for good with a 14-yard fumble return and Ji'Ayir Brown rumbled 70 yards with another fumble as the Nittany Lions blew it open in the second half.

Penn State led 28-10 at the half and the game was all but over after Curtis Jacobs sacked freshman quarterback Gavin Wimsatt on the fourth play of the second half and Brown picked up the fumble and had a clear path to the end zone.

“I thought we were dominant," said Jacobs, who felt the scoop and score turned the momentum. "We had a little mishap early, but we were able to get back to where we were supposed to be.”

The last time Penn State scored on offense, defense and special teams in a game was in 2017 against Indiana.

Freshman Kaytron Allen rushed for 117 yards and scored on an 8-yard run as Penn State won its third straight. The Nittany Lions defense limited Rutgers to 167 yards and forced three turnovers that led to 21 points.

Freshman quarterback Gavin Wimsatt (10-of-29 for 122) threw a 4-yard touchdown pass to Shameen Jones in the first quarter to give Rutgers its last last at 10-7. The Scarlet Knights have lost 37 straight games to ranked opponents, a run that dates to 2009. The 55 points were the most it has allowed this season.

Rutgers coach Greg Schiano said his team's margin of error is very slim. He felt the biggest play might have happened in the second quarter with his team trailing 14-10. Penn State punt Barney Amor mishandled a snap and was tackled near his own 20-yard line.

“We're not quite good enough yet to overcome that,” Schiano said, noting later he sincerely believes that Scarlet Knights are getting better as a program and will challenge for a league title down the road.

Singleton and Allen are the first two freshmen in conference history to run for at least 700 yards for the same team.

“It just shows that we’re doing something right as (an offensive line) unit," lineman Sam Wormley said. "That our running backs are able to trust us and hit the holes and believe in our blocks and we’re going to make that block. It just shows that as a unit, we’re all coming together.”

NOTES: ... Singleton’s return was the first for Penn State since Lamont Wade had a 100-yarder against Michigan State in 2020. ... It was the second kickoff returned for a TD against Rutgers this season. Jaylin Lucas of Indiana opened a game here with a 93-yarder earlier this month. King’s TD was the Nittany Lions’ first fumble return for a TD since Torrence Brown had a 9-yard return in 2016. ... Rutgers punter Adam Korsak punted 12 times and now has an NCAA record 339 attempts, breaking the old mark of 337 set by Alexander Kinal of Wake Forest (2012-15). His 14,876 yards punting is also a record, betting old mark of 14,546 by Derek Admas of Kent State-Northwestern (2016-2021).

Penn State: The Nittany Lions are still in the running for a major bowl berth. If No. 2 Ohio State and No. 3 Michigan get berths in the college football playoffs, if might be the Rose Bowl. The two undefeated team meet next Saturday in Columbus, Ohio.

Rutgers: The Scarlet Knights have lost four straight and their hopes for a second-straight postseason game are over.