No. 13 Wake Forest looks to wrap up ACC Atlantic at Clemson 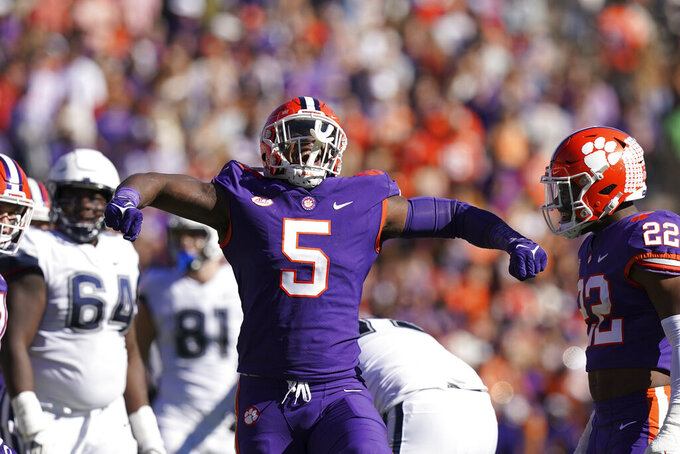 Line: Clemson by 4 1/2, according to FanDuel Sportsbook.

Wake Forest looks to clinch its first ACC Atlantic division title since and spot in the league championship game since 2006. A Clemson win would keep the Tigers in contention for a seventh consecutive trip to the title game, although the Demon Deacons would wrap things up in its final game at Boston College on Nov. 27.

Wake Forest quarterback Sam Hartman against Clemson's secondary. Hartman has played like an ACC player of the year favorite this season, throwing for 3,163 yards, 30 touchdowns and eight interceptions. The Tigers are fourth in ACC pass defense and second in the league with just nine TD passes given up.

Wake Forest: WR A.T. Perry is averaging more than 91 yards a game in receptions and is tied for the ACC lead this season with 11 touchdown catches. If the Demon Deacons can get big plays out of Perry, it will be hard for Clemson to slow down the offense.

Clemson: LB James Skalski is a sixth-year “super senior” and ninth in the ACC with 77 tackles. He's the soul of the Tigers' league-leading defense and will be called to disrupt Wake Forest's slow developing mesh-point style and drop back in coverage to thwart receivers.

Wake Forest has lost 12 straight games to Clemson since a 12-7 win in 2008 that led to the dismissal of Tigers coach Tommy Bowden and the hiring of current coach Dabo Swinney. ... The last team to clinch an ACC Atlantic title on Clemson's home field was Boston College and quarterback Matt Ryan in 2007. ... Wake Forest reached nine wins for just the third time in 114 seasons of football. The first two came in 2006 and 2007. ... Clemson has a 33-game home win streak dating back to a 43-42 loss to Pitt in 2016. ... Wake Forest leads the ACC at 44.7 points a game this season. Clemson enters as the league leader in fewest points allowed at 15.3 points per game. ... Kicker Nick Sciba of Wake Forest leads the ACC with 101 points off 16 field goals and 53 extra points.